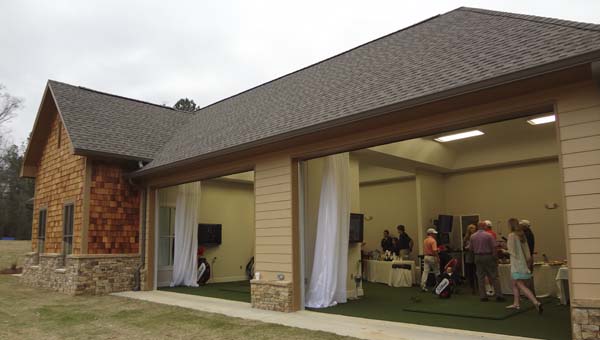 HOOVER – Another chapter of Greystone Golf and Country Club’s construction projects came to a celebratory close as members and staff gathered at the new Golf Performance Center for a ribbon cutting and open house March 21.

Located on the Legacy driving range, the 4,000-square-foot GPC will house the Blackburn Golf Academy at Greystone, where Director of Instruction Mark Blackburn and other authorized instructors and professionals will work with athletes of all ages.

“We’re super excited,” Blackburn said. “It’s been a couple of years in the making. It’s not just for golf; we’re trying to build athletes, not just golfers.”

Regarding treatment, chiropractic adjustments will be available.

“You can get treated here, you can get trained here,” Blackburn said. “It’s like a one-stop shop.”

Joe Verciglio said he went through a six-hour program – a “performance center experience” – that covered putting, chipping, driving, personal evaluation of physical well-being and spine corrections prior to the open house March 21.

“This is a place to relax and have a good time and improve your game,” Verciglio said.

Frank Paduch, Greystone member and contractor with KFP Construction Inc., was involved with the site planning, design and financing for the project, which started in August 2014 and finished in early March.

“We have three individual bays where Greystone can offer instruction to individuals or groups, especially when the weather is an issue and we need to have indoor teaching,” Paduch said.

The GPC also has the ability to bring corporate outfits to Greystone, Paduch said.

“It’s not only open to just members,” Paduch said. “It’s a facility that companies around the Southeast can come and experience Greystone with team building in this facility. They play at a top-notch course.”

The grand opening of the GPC came two weeks after the new Golf Operations Center and Founders Plaza opened.

“We have not had a high-tech teaching facility like this since the club opened,” Club President Roy Sewell said. “We see this as a definite component of helping us recruit new members as well.”

Sewell said Greystone members and non-members have access to the GPC.

The two new golf centers and plaza are all part of a large project to improve Greystone and prepare it for the 2016 Regions Tradition golf tournament.