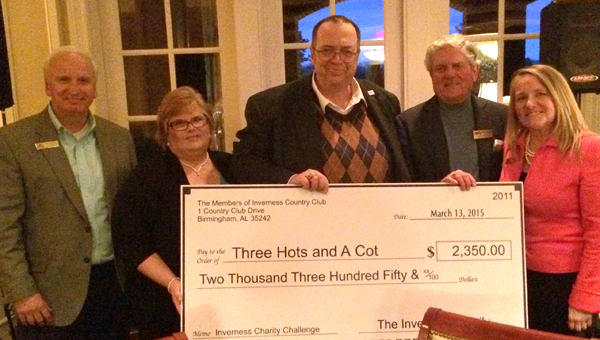 The Inverness Charity Challenge was inspired by a similar event hosted by a club in Michigan four years ago.

Through the month of January, Inverness Country Club Members could vote for a charity with a $5 donation.

On Friday, Jan. 30, Inverness Country Club hosted a Jazztini Friday Night Dining event with representatives from each of the nine nominated charities. Members had the opportunity to learn more about each charity throughout the night.

“The evening was vastly attended. Armed with full knowledge of the charities, the votes/donations continued through the month of February,” the release read.

Voting concluded on Feb. 27, and the top three charities were Three Hots and A Cot, Pancreatic Cancer and Carly’s Clubhouse. These three organizations were acknowledged and received their donations at Inverness Country Club on March 15.

Inverness Country Club will benefit the winning organization, Three Hots and A Cot, with a larger clubhouse event or golf tournament.

“It is because of the generosity of the members of Inverness Country Club that close to $6,000 was raised to aid these local nominated charities,” the release read. “We are glad that our members had an opportunity to be exposed to all these fine charities. It is our hope that the bond between the charities and our members during this event will last for many years to come.”