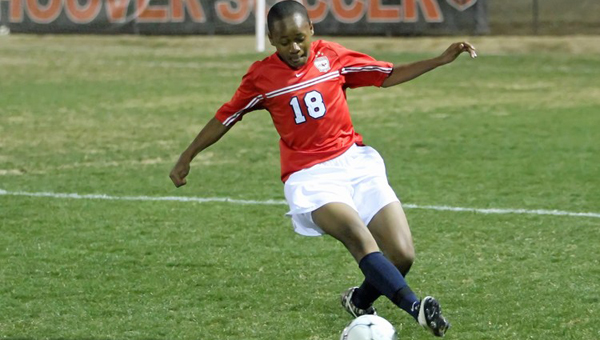 Kennedy Davis and the Oak Mountain Eagles beat Vestavia Hills on March 21 in the finals of the Metro Championship. Oak Mountain redeemed an early-season loss to Vestavia with the win and moved to 14-2 on the year. (Contributed / Omhsboyssoccer.com)

HOOVER – The Oak Mountain soccer Eagles have only been held scoreless once this season, in an early-season, Feb. 14 loss to Vestavia Hills. The Eagles have only lost twice to date, once to Vestavia and once to Bob Jones, (coincidentally, these are the top-three ranked teams in class 7A as of March 22) and had the unique opportunity to redeem one of those losses in the championship game of the Metro Tournament on March 21.

To reach the championship game, Oak Mountain defeated Hoover for the second time this season by a score of 2-1. Both games have finished 2-1 and both have been won in extra time. Kennedy Davis was the hero in the semi-final matchup. Davis, a sophomore, scored the first goal of the game with 14 minutes left in regulation, but Hoover responded with a goal of their own to send the game into overtime. Davis again broke loose in the first overtime period to score and send the Eagles into the championship game.

The championship game saw a motivated Oak Mountain squad take the field. In the first 10 minutes of play Chad Jeter took a pass from Davis and knocked it past the Vestavia keeper to give the Eagles the early lead. Just minutes later, Oak Mountain added another goal when Hunter Holstad flew down the left side of the field and drew the keeper out before passing to Hunter Ratliff who scored on an open goal.

The 2-0 lead held until midway through the second half when Vestavia slid one past keeper Jaxson Ellis. Both teams had a number of chances throughout the remainder of the game, and Ellis came through with a number of key saves to maintain the Oak Mountain lead. A barrage of activity came with around two minutes left when the Rebels had a number of close chances before Oak Mountain cleared the ball and held on for the 2-1 win.