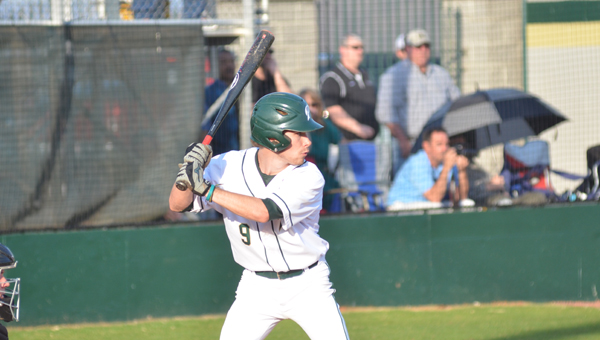 Justin Anderson and the Pelham Panthers dropped two games on March 20 to two schools from Georgia and fell to 12-6. (Reporter Photo / Baker Ellis)

NEAL EMBRY / For the Reporter

PELHAM – The Panthers hosted two visiting schools from Georgia on March 20 and dropped both games. Both Collins Hill and Mill Creek put up double-digit run totals on the Pelham pitching staff, and the Panther bats could not keep up.

The Collins Hill Eagles (Ga.) got off to a hot start against the Pelham Panthers, and despite several impressive rallies by the Panthers, were able to hold on to a 14-13 win.

Eagles third basemen Riley King started the scoring with a leadoff home run, and teammates William Holland and Cole Zabowski added two more runs in the first inning to put the visitors up 3-0.

After Collins Hill added two more runs in the top of the third, Pelham scored their first runs of the game in the bottom of the inning, as Hunter Stovall and Boomer Murchison both drove in runs to cut the lead to three runs.

Stovall hit a three-run home run in the fourth inning to bring Pelham to within one run, but the Eagles responded with a seven-run fifth inning, increasing their lead to 13-5.

Not to be outdone, the Panthers scored six runs of their own in the bottom half of the fifth.

Going into the bottom of the seventh, Pelham found themselves down 14-11. After a pitch hit Justin Anderson, Stovall drove another ball over the fence to cut the lead to one.

Unfortunately for the Panthers, that was as close as they got, as the next two batters struck out before the Eagles forced a groundout to end the game.

The Panthers used three pitchers in the game, while the Eagles used five. Mitch McCain got the win for Collins Hill, and Connor Radcliff took the loss for Pelham.

The Hawks put up three runs in the first inning, and held the Panthers to one hit and no runs through the first four innings.

Down by four runs in the bottom of the fifth inning, the Panthers offense rose to the occasion and cut the lead in half. After Paul Benton and Sam Finnerty reached base on walks, Anderson drove both runs in with a two-out triple.

After a scoreless sixth inning for both teams, the Panthers needed to keep the Hawks off the scoreboard in the top of the seventh.

Pelham pitcher Chase Martin hit the leadoff batter for Mill Creek, and then walked Beau Brundage to start the inning. The Panthers were unable to overcome the leadoff walks and eventually surrendered eight runs in the inning, as the Hawks increased their lead to ten.

While Pelham did get a man on base in the bottom of the seventh, they were unable to mount a rally and lost 12-2.