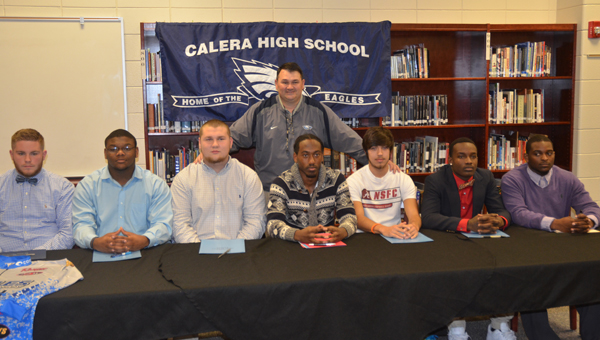 From left: Brandon Acker, Ty James, Adam Meadows, Frank Thomas, Austin Ford, Dez Kursh and Shakeith Tyes all pose for a picture in front of head fooball coach Wiley McKeller on March 20. All signed scholarships to play college football, except Acker, who signed a scholarship to be a member of the bass fishing team at Faulkner University. (Reporter Photo / Baker Ellis)

Tyes, Meadows, Thomas, Ford, James and Kersh all signed football scholarships while Acker, a football player, signed a scholarship to be a member of the bass fishing team at Faulkner University in Montgomery. Head football coach Wiley McKeller was also present to participate in the ceremony and watch his former players live out one of their dreams.

“It’s always so good to see guys rewarded for hard work,” McKeller said. “What’s especially gratifying is that I know every one of these guys will represent Calera with character and class wherever they go.”

Tyes, a running back, attended the Mr. Football banquet in January and holds the record for career touchdowns at Calera with 73. He will attend Highland Community College in Kansas.

“I am very grateful for an opportunity to continue my playing career,” Tyes said during the signing ceremony.

Meadows and James will both attend Stillman College in Tuscaloosa in the fall. Both thanked family, friends and coaches for helping them achieve their dream of playing collegiate football.

Thomas will attend Lane College in Jackson, Tenn. Thomas specifically thanked his mother for encouraging him to chase his dreams and be willing to push him past his limits.

Ford, a soccer player by trade, will attend Huntingdon College in Montgomery where he will continue to hone his newly-developed kicking skills.

Kersh is currently in his first and only year at Calera High School. He specifically thanked Coach McKeller for giving him, the new kid, a chance to play and compete and earn a college scholarship. Kersh also said he will be grateful to Coach McKeller for aiding him in the recruiting process.

Acker, the only non-football signee of the day, specifically thanked his family for their willingness and desire to help him earn his fishing scholarship.

Before the seven athletes signed, Coach McKeller said, “This group encompasses all the positive traits we want to model for our younger athletes here at Calera.”