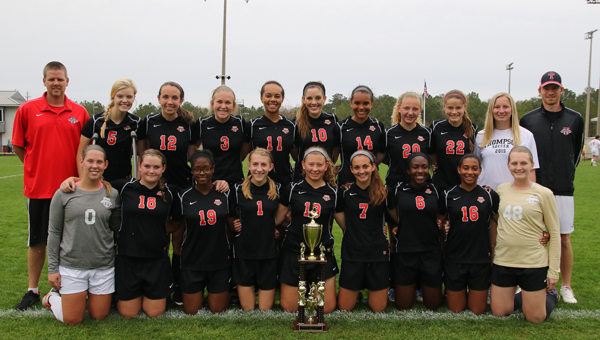 HOOVER – The Metro Tournament championship game on March 21 pitted two of the top girls programs in the county against each other when class 6A No. 1 Chelsea lined up opposite against class 7A No. 6 Thompson. The contest needed two overtimes before the Lady Warriors were able to emerge victorious.

Thompson’s semi-final matchup against Hoover on March 20 was close as well. The Lady Bucs came into the game with a 9-3-1 record and a No. 8 ranking in class 7A in the state according to Eurosportscoreboard.com. The two schools had met once earlier this season in a game that saw the Lady Warriors come away victorious by a final of 2-1. This contest generated the same result, as freshman Peyton Poe and sophomore Meghan Cottingham both found the back of the net for Thompson in the semi-final game to lead the Lady Warriors into the finals. Hoover continued to fight in the face of a 2-0 deficit and scored a meaningless goal with three seconds left in the game to bring the final score to 2-1.

Chelsea came into the finals fresh off a 4-1 thrashing of Homewood. The Lady Hornets outscored their first three opponents in the Metro Tournament by an incredible 24 goals. The offensive output has been impressive all year for Chelsea, as they have scored double-digit goals in four of their 14 games this season.

The offensive firepower was nowhere to be found in the championship game however, as both teams played an evenly matched first half that generated no goals. The scoreless stalemate held late into the second half before, with 12 minutes remaining in the game, Cottingham knocked a ball past the Chelsea keeper to put the Lady Warriors noses barely out in front.

Chelsea however did not lie down, and showed why they are one of the top teams in the area when they tied the game at 1-1 with four minutes left in regulation.

After the first overtime period the score remained tied at 1-1. The 1-1 tie held until there were three minutes left in the second overtime period when Cottingham broke loose close to Chelsea’s goal, ended up on the ground, and nudged the ball into the Chelsea net to give the Lady Warriors the win and their second consecutive Metro Tournament championship.