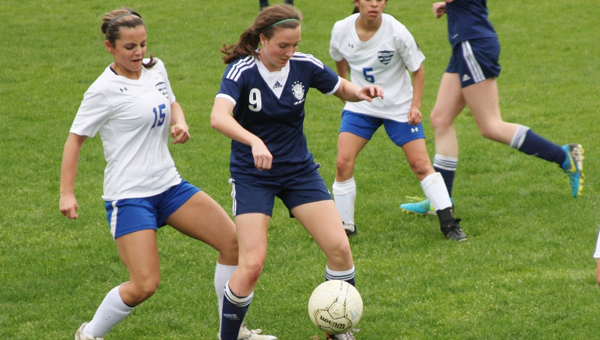 CHELSEA – Chelsea High School played host to two entertaining and fast-paced soccer matches on the evening of March 23. Their Hornets and the visiting Briarwood Lions combined to score nine goals over the two-game span.

The girls played first, and the game was a matchup of two top-five teams in the state. The Lady Hornets are currently ranked first in the state in class 6A while Briarwood is ranked fifth. Chelsea, fresh off a double-overtime loss to Thompson in the finals of the Metro Tournament, was looking to get back on track against another high profile opponent, however Briarwood has found its midseason stride and got the road win via a 3-1win.

Sara Ferguson struck first for the Lady Lions, and the 1-0 lead held until midway through the second half. Down by a goal on their home turf, Megan Young brought the Lady Hornets back to even with a great solo effort with 22 minutes left in the game to tie the game at 1 goal apiece.

The stalemate held for just under nine minutes before the Chelsea defense broke down in the face of the Lady Lions attack. Maggie Adcock broke free in the 67th minute to put Briarwood back on top before adding another goal at the 72nd minute mark to essentially put the game away.

Both teams battled throughout the damp, muddy afternoon and proved they will undoubtedly be tough outs when the state tournament rolls around. Possession was at a premium in the contest, and Chelsea and Briarwood both controlled the ball for relatively even amounts of time until the last fifteen minutes of the game, when Briarwood began to assert more control.

The Lady Lions are now winners of their last two games in a row, but were on a three-game losing skid before that. With the win against Chelsea, Briarwood moved its record to an above-.500 7-6-1. Chelsea fell to 9-5-1 and has lost two straight games.