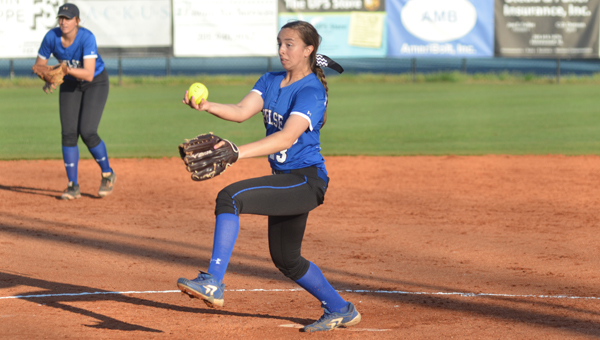 HOOVER – Mallory McCarty threw 126 pitches in eight innings of work on a beautiful March 24 afternoon in a losing, extra-inning effort against the visiting Lady Hornets of Chelsea. Opposite McCarty for most of the game was Chelsea ace Caiti Davis, who pitched six innings before being relieved by Sarah Cespedes, who pitched two scoreless innings of relief work. The two Chelsea pitchers combined to throw 128 pitches total, just two more than McCarty threw by herself over the duration of the game.

The contest remained scoreless until the third inning when Chelsea’s Mallory Bradford singled with one out and was brought home three batters later when Alex Smithson knocked a single to center field. The lead would not last long, as Spain Park’s Marley Barnes would hit a sacrifice fly in the bottom of the fourth which was good enough to bring home Julianna Cross, who was perched on third previously.

With the score tied at one run apiece, Chelsea added another tally to the scoreboard when a pair of leadoff doubles by Riley Coin and Davis, which brought Coin home to make the score 2-1. Spain Park responded in the bottom half of the sixth with two runs of their own when Marley Barnes smacked a triple to left field late in the inning to take a 3-2 lead into the last inning of regulation.

Ashlee Sanders of Oak Mountain unloads a pitch during their March 24 game against Hillcrest. The Lady Eagles lost by... read more