Girlfriend surprises Galloway on Dancing with the Stars 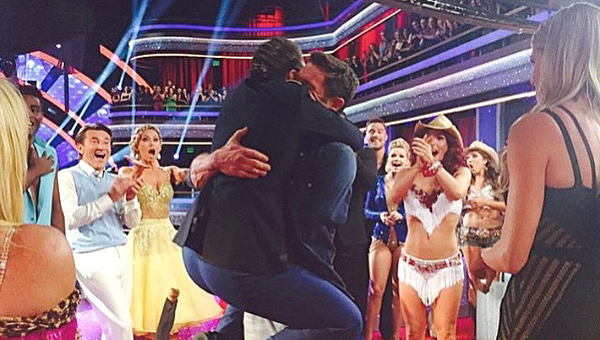 Noah Galloway embraces his girlfriend, Jamie Boyd, during the March 23 episode of Dancing with the Stars. (Contributed/Noah Galloway)

Alabaster resident Noah Galloway has had a pair of emotional weeks while competing on “Dancing with the Stars.”

After performing on the show for the first time on March 16, and receiving a plethora of support from the crowd and his family members in attendance, Galloway received a welcome surprise during the March 23 show.

After performing with his partner on the show, Sharna Burgess, and receiving his scores from the judges, Galloway got a major surprise when his girlfriend, Jamie Boyd, appeared on the show’s set.

“Every cast member, dancer and anyone on the show has been so amazing. And the amount of support from fans, friends, family and military is almost too good to be true,” Galloway wrote in a Facebook post on March 24. “But with all due respect to everyone…this moment right here with (Boyd) is only compared to last week’s emotions when I saw how proud my children are of me.

“I can’t thank everyone involved enough for making this happen, from ABC to Jamie’s chain of command at Ft. Leonard Wood. Thank you all,” Galloway wrote.

Galloway avoided being sent home from the show in the first round of cuts, and saw his judge’s scores rise one point from 26 to 27 from the first to second week. Galloway and Burgess garnered one of the highest public vote totals out of any pair on the show during the first week of season 20.

Galloway has developed a strong following among residents of his hometown, as Alabaster locations such as Chubb’s Grub Station and the Alabaster YMCA have begun holding watch parties each night Galloway is on the show.

There are three more dates available to those needing help from UM to file their income taxes for free. (File)... read more