Hornets fall to Lions at home 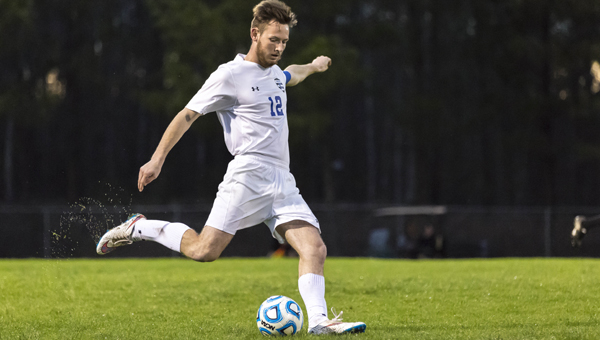 Jake Cespedes of Chelsea looks to clear a ball during their March 23 showdown with Briarwood. The Hornets lost to the visiting Lions by a final of 3-2. (Contributed / Ron Potts at pottstography.com)

CHELSEA – In the second game of a March 23 doubleheader between Chelsea and Briarwood soccer, the boys’ programs took the field in what turned out to be an entertaining game.

The two programs are currently in different places. Briarwood has six seniors on its roster that help lead the Lions while the Hornets are self-admittedly young and are still trying to find their identity. The game between the two squads on this muddy Monday evening was scrappy and intense, and in the end the visiting Lions escaped with a 3-2 win.

Briarwood was held without a win for the better part of a month during the early portion of the season. After winning the first game of the season against St. John Paul II on Feb. 10, the Lions did not win again until their matchup with John Carroll Catholic on March 6. In between, Briarwood’s record was an unsavory 0-4-1. Since that time, the Lions have not lost, and with the win against Chelsea are now on a four-game winning streak.

It was the Hornets, however, who struck first in the matchup. James Crisman rocketed a shot past the Briarwood keeper in the 26th minute of the first half to give Chelsea the early lead. Chelsea’s time in front was short lived, as Andrew Ball scored a goal on the heels of Crisman’s to bring the game back to even at 1-1. Chelsea never led the rest of the way.

The 1-1 tie held until the 51st minute of the game when Garrett Burks ripped a shot from 35 yards out into the upper netting. Burks caught the entire Chelsea defense off guard with his blistering shot that was truly one of the goals of the year. Chelsea however did not crumble in the wake of Burks’ goal and instead turned to one of their few seniors to bring them back. Thirty-nine seconds after Burks had given Briarwood the lead, Josh Bartlett chested a ball down in the Briarwood box, took a touch to his left and hit a strike into the side netting to bring the score back to two goals apiece.

The Hornets defense could not hold, however, and with less than 20 minutes left in the contest Ball and Matthew Wood put together a succinct passing combination that led to Ball’s second goal of the game, which was enough to give the Lions the win.

Oak Mountain winners of 2 of last 3

Since starting the season 6-6, Blake Schilleci and the Oak Mountain Eagles are 4-1 and have improved to 10-7. (Contributed)... read more