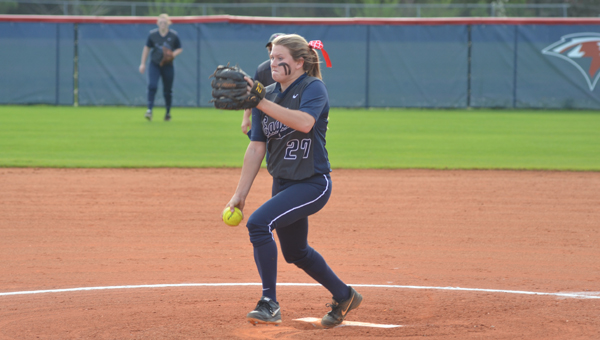 Ashlee Sanders of Oak Mountain unloads a pitch during their March 24 game against Hillcrest. The Lady Eagles lost by a final score of 8-4. (Reporter Photo / Baker Ellis)

NORTH SHELBY – Ashlee Sanders took the mound to start the game for Oak Mountain on March 24 against visiting Hillcrest and threw 126 pitches in 4.2 innings of work, which averages to 9 pitches per batter. Sanders was relieved by Abby Jones who pitched the final 2.1 innings in the relief effort. By the time Jones came to the mound however, Hillcrest had already piled eight runs on the scoreboard and was well out in front of the Lady Eagles, and held on for the 8-4 win.

After a scoreless first inning, Hillcrest hung four runs on the Lady Eagles defense in the top of the second to build an ample lead. The 4-0 advantage held until the bottom of the third when Oak Mountain got two of those runs back. Madeline Porter singled to lead off the inning and was subsequently able to make it home after Carmyn Greenwood singled to advance her to second. She then took it upon herself to advance to third and subsequently home on the next two pitches. When Jones singled soon after, Greenwood made it home to bring the score to 4-2.

With the loss, Oak Mountain fell to 5-7 on the year.

Calera drops 2 of 3 in one day