Oak Mountain winners of 2 of last 3 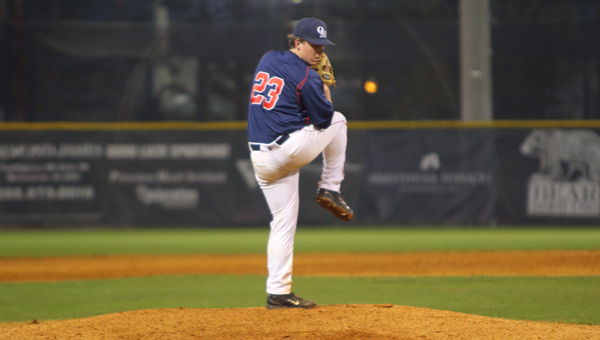 Since starting the season 6-6, Blake Schilleci and the Oak Mountain Eagles are 4-1 and have improved to 10-7. (Contributed)

Through 12 games of the 2015 campaign, the Oak Mountain baseball Eagles stood at 6-6. Since that time, they have ripped off a 4-1 record to move above .500 and stand at 10-7. In their last three games, the Eagles have amassed a 2-1 record against stiff competition.

Blake Schilleci pitched a complete game for the Eagles against the third-ranked Spartans of Mountain Brook on March 19 and held his own in the contest. Schilleci gave up only two hits and one run in his six innings of work and slung 108 pitches. Schilleci’s gem would be in vain, however, as the Spartans’ lone run would be enough to lift Mountain Brook to victory, as Oak Mountain was not able to score a single run through seven innings on Spartan ace Alan Hale.

In the first game of a doubleheader with the Mustangs of Stanhope-Elmore, the Eagles scored seven runs in the first two innings to jump on the visitors early. Daniel Salchert, Graham Hackbarth, Chase Stiffler and Logan Gibbs all contributed two hits on the day while Brandon Whittaker led all batters with three. Hackbarth had the play of the day, however, as his second-inning homer sailed over the left field fence and brought home three runs. Kirk McClendon and Will Driskill took the mound in turn and combined to give up five hits and two earned runs.

Gibbs walked to the top of the mound to start the second game of the double header with the Mustangs and lasted six innings. He only needed 75 pitches to mow down 18 batters and relinquished just two hits and no runs. Chris Lamb closed the last inning out in only 10 pitches. This game was scoreless until the bottom of the fourth inning, when Oak Mountain ripped off three runs, one run and two runs over the next three innings to get the 6-0 win.