Chelsea’s Fire at the Foothills fundraiser will be April 18 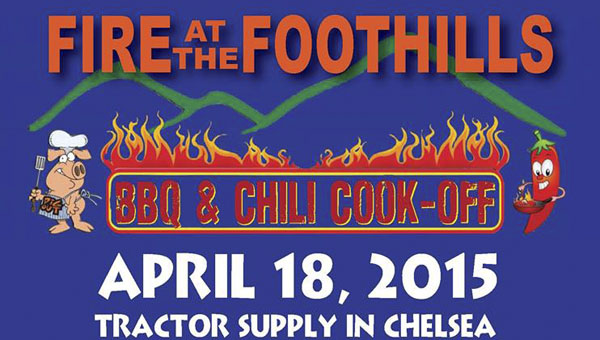 Chelsea’s annual Fire at the Foothills BBQ & Chili Cook-Off will be held on April 18 from noon to 4 p.m. at Tractor Supply in Chelsea. (Contributed)

CHELSEA – What started as a friendly argument between two Chelsea residents about who had better-tasting chili about five years ago has turned into a community-wide fundraising event for local groups and charities.

The annual Fire at the Foothills BBQ & Chili Cook-Off is a fundraiser for Chelsea Fire and Rescue’s fire safety program featuring Hero the Dalmatian, along with the Chelsea Kiwanis Club and March of Dimes.

This year’s event will take place April 18 at Tractor Supply in Chelsea from noon to 4 p.m.

“The whole thing started several years ago with an argument between Scott (Weygand) and Justin Fogo about who had the best chili recipe,” Chelsea Fire and Rescue Lt. Don Williamson said. “So, they decided to let some firemen be the judges, and the chili cook-off was born.”

“This program has helped get the fire safety message across to kids … because everybody loves the dog,” Chelsea Fire Chief Wayne Shirley said. “This whole program costs the city nothing. Money generated at this event pays for the whole Hero program.”

To their knowledge, Shirley and Williamson said Hero is the only trained firehouse Dalmatian dog that is a certified fire department member in the state.

“We decided to let school kids, when we got him (Hero) five years ago, name him,” Williamson said, noting the fire department received more than 150 entries. “He’ll crawl, he’ll stop, drop and roll … It’s all the things we teach the school kids.”

Proceeds from the barbecue contest benefit The March of Dimes and the Chelsea Kiwanis Club and charities it supports.

“The money the Chelsea Kiwanis Club raises goes to local charities and local non-profits around the area,” Weygand said. “It’s just a lot of fun. It’s a great way to bring in the spring.”

Admission is free, but donations are welcome, he said.

The City of Chelsea assists the Kiwanis Club with running the event.

“We need this to grow,” Shirley said. “We want people from everywhere to bring chili over.”

Total prize money for the event is $2,000. No entries will be allowed after April 3.

The event will also include live music, a kids’ play area and barbecue and chili tastings.

For more information or to sign up for the cook-off, visit the Fire at the Foothills BBQ & Chili Cook-Off page on Facebook.

Students present a bill on distracted driving prevention during a mock session of Congress at Oak Mountain High School on... read more