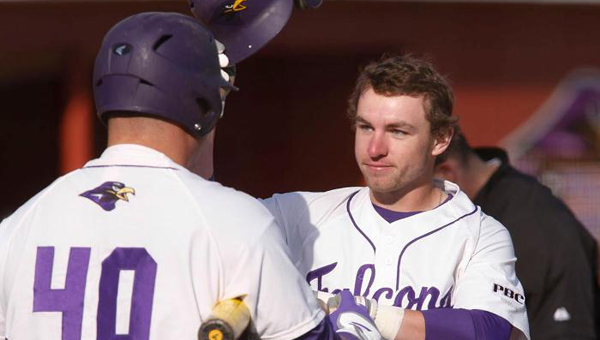 The University of Montevallo baseball Falcons combined to score 25 runs in two games against Miles College on March 24. The Falcons won both games to improve to 14-12. (Contributed)

MONTEVALLO – University of Montevallo junior Steven Knudson homered for the 13th time this season in game one of a doubleheader against visiting Miles College, leading the Falcons to the first of two wins against the Golden Bears in a 8-2 and 17-0 sweep March 24 at Kermit A. Johnson Field.

Knudson, who is second nationally among NCAA Division II hitters with 13 homers this season, finished 1-for-3 at the plate while driving in two runs and scoring one run in the victory.

Sophomore Alex Jones led the Falcons (14-12) offensively as he finished 3-for-4 at the plate with a double and drove in two runs.

Junior Thomas Bradey scored one run and drew a pair of walks in the win.

Sophomore Mason MacDougall (1-0) picked up his first win on the mound this season with the seven-inning, complete-game victory. MacDougall allowed just two earned runs on five hits and finished with four strikeouts without issuing a walk.

Montevallo plated 12 runs in the bottom of the fifth inning in the Falcons’ 17-0 shutout in the nightcap, marking their biggest victory margin since defeating Arkansas-Monticello 18-1 in a doubleheader March 1, 2008.

The Montevallo women’s distance medley team set a school record with a time of 12:09.92 in the Emory Invitational Meet... read more