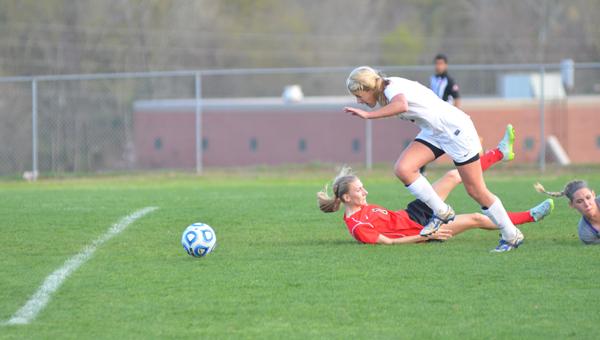 Alexandra Dunn breaks through the Thompson defensive line moments before scoring the first goal of the game on March 24. (Reporter Photo / Baker Ellis)

NORTH SHELBY – There are six girls soccer programs in the county currently ranked in the top 10 of their respective classes. Two of them squared off on March 24 when the Lady Warriors of Thompson traveled a few exits up Interstate 65 to play cross-county foe Oak Mountain. Thompson is currently ranked sixth via Eurosportscoreboard.com in class 7A while Oak Mountain is ranked fourth.

A year after the girls program at Oak Mountain finished one of the greatest seasons in Alabama soccer history that ended with a 26-0-1 record, a state championship and national acclaim, the program has hiccupped slightly out of the gate in 2015, losing twice to Vestavia Hills and once to Hoover in the first month and half of the season.

Thompson, who stood at 13-3 before the March 24 showdown, has given up five goals all year in the 13 games they have won, but has conceded 10 goals in the three games they have lost. The Lady Warriors have used a combination of underclassmen talent alongside consistent senior leadership on their way to becoming one of the top teams in 7A this year.

Thompson did not go away quietly, and the 1-0 advantage held until late into the second half. Morris made a number of saves to keep the Lady Warriors in the game, including a save on a well-placed shot by Sydney Jeter with 15 minutes left in the first half.

Both teams continued to battle throughout the second half, but the score held steady at 1-0. In the waning moments of the game, the Lady Warriors made a last-ditch offensive effort that left them vulnerable on defense. Oak Mountain counter-attacked and punched in their second goal of the game in the final 20 seconds to take the 2-0 win and advance to 15-3-1.