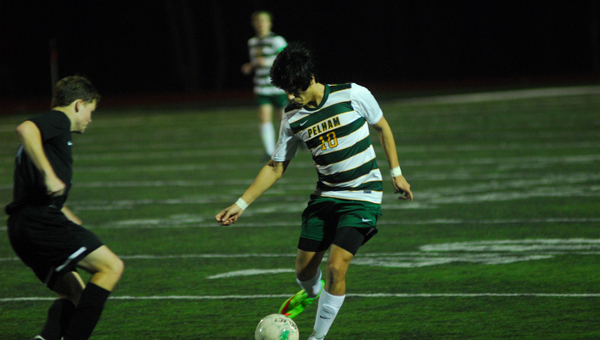 The Pelham soccer Panthers are ranked third in the state in class 6A and have the state tournament in their sights, where they will look to make a deep run. (Reporter Photo / Baker Ellis)

PELHAM – Patrick McDonald is in his ninth year as the head coach of the Pelham Panthers boys soccer program, and believes this is one of the best teams he has ever had. In 2010 the Panthers finished with a 17-4-2 record and was a very talented squad, according to McDonald, but this team may be his most talented.

“I would probably say so,” McDonald said when asked if this is his most talented team yet in a March 25 phone interview. “This is the deepest team. The depth of our squad, from the first player to the 22nd player, is great.”

McDonald played soccer in his high school days at Hillcrest High School before attending the University of Montevallo where he was a “glorified dribbling cone” for the Falcons’ team for a season. During his time at Montevallo he began to fully grasp his passion for the game, and decided he wanted to coach the game. After spending a year teaching in the Vincent school system, he relocated to Riverchase Middle School where he launched the middle school soccer program.

“I started the program two years before the high school program,” McDonald said. “When my players moved to high school I promoted myself up with them.”

McDonald is now in the unique position of holding the dual-role of head middle school and varsity coach. He loans players out during their freshman and JV years, but is involved with his players from seventh grade until they graduate high school.

“I love coaching middle school,” McDonald said. “In high school, kids will listen and be attentive and be respectful, but in middle school there is just more joy. There’s a distinctive difference between middle and high school. But I get to coach a kid when he’s a seventh grader and when he’s a senior. You really see the kid growing not only as a young man but as a soccer player.”

His current squad stands at 11-3-2, is ranked third in the state in class 6A and is in first place in the three-team area with Chelsea and Briarwood. As far as expectations for the rest of the season are concerned, McDonald sees no reason this team can’t bring home a state title.

“It’s (state title) attainable this year,” he said. “Every year you want that to be the goal in the back of your mind, but it’s not always attainable. If the kids continue to play the way they are playing, it’s attainable.”