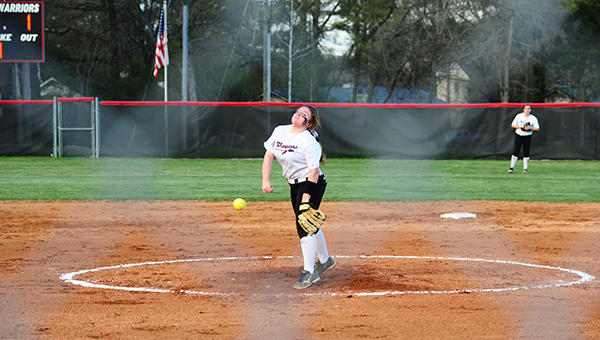 ALABASTER–The Thompson Warriors girls softball team got a nice win against the visiting Helena Huskies on Tuesday, March 24, and two key players in the game were Thompson teammates and sisters Haley and Macie Crumpton.

Macie Crumpton pitched a complete seven innings while giving up just one run and issuing two walks to record the win.

While the game was tied at one a piece heading into the bottom of the fifth inning, the Warriors had runners on first and second when Haley Crumpton approached the plate and launched a home run deep over the center field fence to clear the bases and put the Warriors ahead 4-1.

Solid defense and zero errors committed by the Thompson defense was another crucial factor in solidifying the win for the Warriors.

The Helena Huskies softball team is in their first year as a program and still trying to become familiar together as a team.

Thompson head coach Jake Parker was happy about the way his team’s defense played and the Warriors ability to come through on offense when it counted most.

“I think we got the hits when we needed to and we had opportunities throughout the game but that one big home run kind of lifted us there at the end,” said Parker. “We played solid defense and I don’t think we had any errors which is very important. I think my pitcher did really well and hit her spots and we had a pretty good all around game I think.”

Thompson moved to 14-7 overall on the year and will play at Chelsea on Wednesday, March 25.