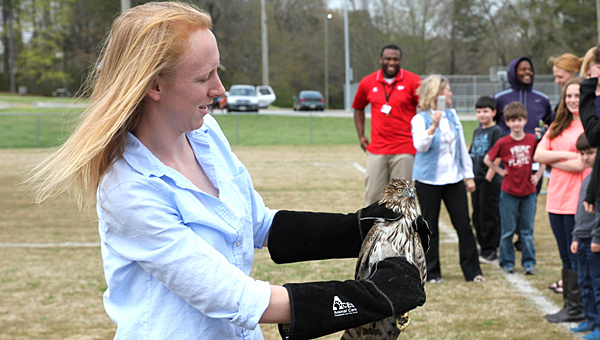 ALABASTER – It didn’t take a Cooper’s hawk long to find its new home in the wooded area near Thompson High School on March 23 after special-needs students at the Warrior Center helped release it to freedom.

“It took one loop around the soccer field and then flew into the trees by the high school,” Warrior Center teacher Denise Whatley said. “The kids loved it.”

Over the past few weeks, Whatley has been working with her niece, Emily Warman, to organize the hawk release for the Warrior Center students. Warman is a second-year veterinary student at Auburn University, and works closely with the AU Raptor Center to care for rehabilitated birds of prey.

“I know they do some bird releases at the (Girl Scouts’) Kanawahala Program Center in Chelsea, so I reached out to her to see if it would be possible for her to do one here at the Warrior Center,” Whatley said, noting Warman visited Alabaster on her spring break. “She did about a 30-minute presentation for the kids, and then we went out to the soccer field and released the hawk.”

All students at the Warrior Center, which is housed in a wing of Thompson Middle School, attended the release, and were excited to see the once-injured bird return to its natural habitat,” Whatley said.

“She is just great with the kids,” Whatley said. “She is going to be a great veterinarian.”