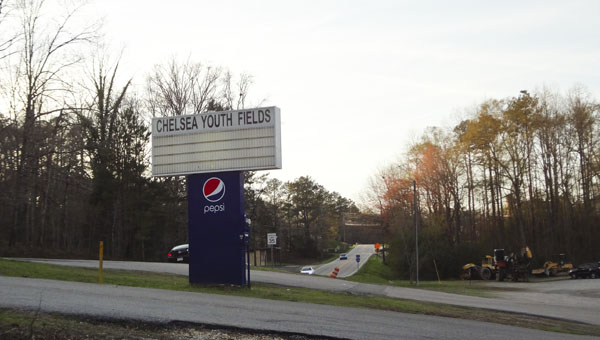 The Chelsea City Council approved a bid from R.E.D. for $95,070 on March 25 for improvements to a gravel parking lot next to the Chelsea Youth Fields off Shelby County 47. (Reporter Photo/Emily Sparacino)

CHELSEA – The Chelsea City Council approved a $95,070 bid from Rodney Davis with R.E.D. for improvements to the parking lot off Shelby County 47 between Liberty Road and the Chelsea Youth Fields during a special called meeting March 25.

Chelsea Mayor Earl Niven said work will start immediately on the parking lot, which will provide additional parking for people going to the ballpark.

Work will include cutting timber to expand the lot and smoothing out its gravel surface.

“We will come back in a year or so and pave it,” Niven said.

The council discussed plans for expanding the lot to provide more ballpark parking during a pre-council meeting March 4.

At the time, Niven said he was in the process of working out an agreement with Liberty Baptist Church in which churchgoers could use the lot on Sundays and Wednesdays, and park guests could use it other days of the week.

Niven said Davis also did the groundwork on the Chelsea Community Center, a new facility expected to open sometime this spring.

The council discussed no additional business at the March 25 meeting.