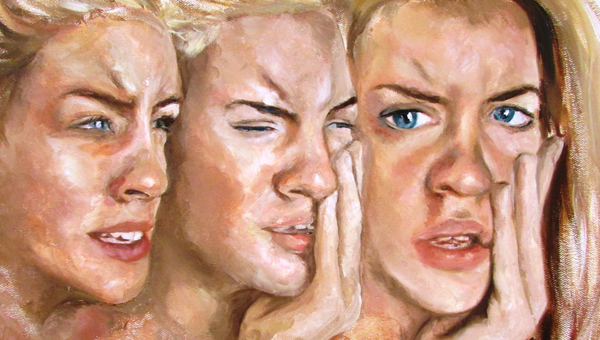 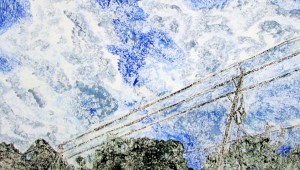 Katlyn Coley took first in painting and John Gerrit Janssen topped the printmaking category at the exhibition hosted at the University of Montevallo earlier this month. Their work was displayed and evaluated alongside pieces from Hoover City, Vestavia Hills, Pelham City, Alabaster City and Shelby County schools students.

“They’re both remarkable,” CHHS art instructor Max Newton said of the two seniors. “I’m very proud of both of them.”

Although he offers them guidance, Newton said students in his advanced art class are able to explore their own creative interests.

“By the time they’re in advanced art, they start making artistic and aesthetic decisions on their own,” Newton said. “They don’t settle for mediocrity.”

Coley’s passion is oil panting. She was recognized for her oil on paper self portrait, titled “Escaping Anger.”

“A lot of it was self inspiration and emotions,” Coley said of the painting, which portrays three emotional stages expressing “how fast a realization can come about.”

Coley is attending the University of Montevallo next year and plans to major in art. She is currently working to complete her Advanced Placement Art portfolio, concentrating on portraiture.

“She has an uncanny ability to work with paint,” Newton said of Coley. “I think she has a really bright future in art.”

“I was driving down the road and I saw a landscape that I thought was beautiful, and I went from there,” Janssen said of the inspiration for his prize-winning piece.

After taking the photo, Janssen painted the image directly onto a plexiglass surface, then transferred it onto soaked printmaking-specific paper in a process that took an estimated “few weeks,” Janssen said.

“It’s a really beautiful example of a monotype,” Newton said of Janssen’s work.

Janssen said he hopes to continue art as an elective at the University of Montevallo next year, although he plans to major in business.

Both Janssen and Coley’s pieces have been submitted to the state level Visual Arts Achievement Program where they will be exhibited among the other top quality works from across the state at the Georgine Clarke Alabama Artists Gallery in Montgomery.