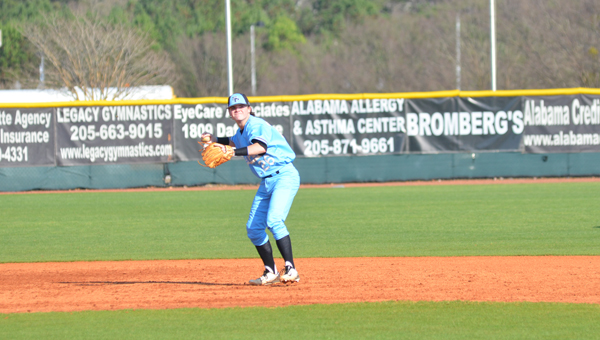 Spain Park fell to the visiting Mountain Brook Spartans by a final of 1-0 on March 24. (Reporter Photo / Baker Ellis)

HOOVER – Mason Duke and Burt Bellande were the focal points of one of the best pitching duels of the year to date on March 24. Duke, Spain Park’s ace, went the complete seven innings, threw 102 pitches and gave up only two hits while striking out 10 and walking six. Bellande also threw a complete game for the visiting Spartans and hurled 114 pitches, gave up three hits and only one base on balls all game.

Duke’s heroic effort would not be enough, however, as the Jaguars fell 1-0 to the class 7A No. 2 ranked Spartans.

Spain Park, currently ranked fourth in class 7A, simply could not find an answer for the Bellande equation. In the bottom of the third inning the Jaguars were a play-at-the-plate away from plating a run, as Charles Mclin was called out on his way home when Drew Hawker reached base on a fielder’s choice. The third inning was the closest Spain Park came to scoring on the day, as they had a man on third base twice in the inning, but left Rodney Anderson stranded at third when Hayden Freeman flied out to center field to end the inning.

Duke carried his shutout and no-hitter into the fourth inning before Mountain Brook scraped the only run of the game across the plate. After giving up a leadoff single to Luke Hartman and walking John David Kubiszyn, Mountain Brook had two men on base with no outs. Two batters later the Spartans would get their second and final hit of the game when Parks Shoulders singled to left field to load the bases. When Mac Harris hit a sacrifice fly one batter later, Hartman was able to come home unscathed to give Mountain Brook the lead.

In most baseball games, a single run can be overcome quickly. But in a pitching duel of this caliber one run was the same as 10. Duke did not relinquish another hit the rest of the way, but the damage had been done, and his magnificent effort was for naught, as the Spartans escaped with the 1-0 victory.