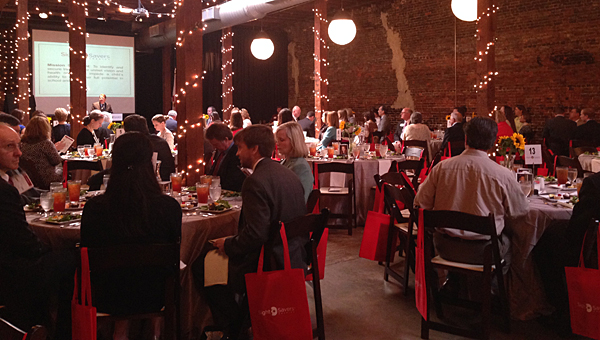 Dozens attended a fundraiser lunch for the Pelham-based Sight Savers America at Birmingham’s B&A Warehouse on March 24. (Special to the Reporter/Ginny McCarley)

BIRMINGHAM – For Haley Barber, a Pelham resident named 2015 Miss Talladega County, the defining moment in her work with Sight Savers America occurred when she witnessed a child with low vision read her first book thanks to a machine given to her by the organization.
“It was incredible,” Barber said. “She kept saying ‘I happy, I happy.”
Barber was one of approximately 250 people who attended Sight Savers America’s luncheon Hero for Sight on March 25 at the B&A Warehouse in Birmingham, said to Chad Nichols, COO of Sight Savers America.
Sight Savers America is a Pelham-based charity, which seeks to “identify and secure treatment for unmet vision and health needs that impede a child’s ability to reach their full potential in school and in life,” according to the organization’s mission statement.
For Sarah Chamberlain, a second-year law student who attended the luncheon with her mother, the work that the organization does is something that “makes sense.”
“Kids aren’t going to learn well without sight,” Chamberlain said, who was inspired by the luncheon to begin volunteering with Sight Savers America.
The luncheon honored Hartwell Davis, Jr., who was presented with the 2015 Hall W. Thompson Hero For Sight Award.
“We are here celebrating the success of the efforts we all have been making,” Davis said. “The way I see it, you’re all heroes for sight.”
Davis also urged the crowd to continue making efforts for children with low vision.
“Let’s continue moving forward with this momentum,” he said.
The 2015 Hall W. Thompson Hero For Sight Commissioned Artist Allan Eddy was also recognized during the luncheon, and the artwork he made for the organization unveiled.
Eddy, who was once told by doctors at Emory that he would probably be completely blind for most of his life after a case of meningitis, now has a sliver of vision in one eye and color distinction in the other.
“I consider the way I make art as an act of faith,” Eddy said. “Based on this painting, if this is as good as it gets and it’s not going to get any better, I’m okay with that.”

Guests enjoy drinks at the bar at the soft opening of the Coal Yard Bar and Grill in Old Town... read more