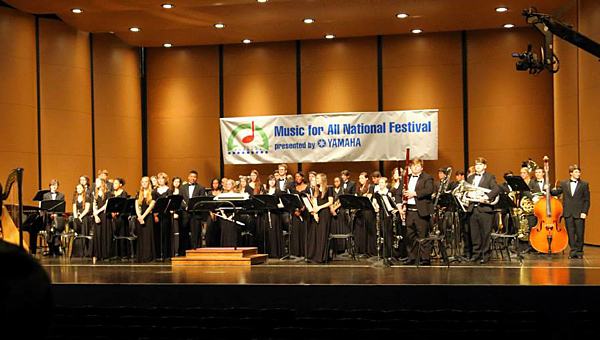 ALABASTER – Thompson High School Director of Bands Jon Bubbett has been teaching for more than 34 years, but he can’t remember a better feeling than the one he had after the THS wind ensemble performed in Indianapolis in mid-March.

“It was easily the best experience I have had in my teaching career,” Bubbett said during a March 26 interview.

The wind ensemble was one of only 15 high school bands from across the nation to receive an invitation to perform at the festival.

Bubbett said months of preparation paid off in a big way for the wind ensemble when it took the stage for its concert during the festival.

“It was a life-changing experience. It was a very emotional and energetic program,” Bubbett said. “The didn’t just play. It’s about taking the notes and rhythms on the page and transferring it into an emotion and communicating that with others.”

Following the band’s performance, the band members spoke with nationally recognized judges during a critique session.

“Those judges are the giants in the business that people go to for advice,” Bubbett said. “Of course they had some little suggestions, but every single one of them said the band sounded wonderful. I have never had that happen.

“When you’ve got people who basically run the band program for the entire country raving about you, it’s a good day,” Bubbett said.

Some of the band members also experienced some life-altering moments during the trip, Bubbett said.

“I had a senior who wanted to go into business, but he wasn’t really sure about it,” Bubbett said. “After the program, he told me he was changing to music ed(ucation).”

“It wasn’t just a home run. It was the grand slam of grand slams,” Bubbett added.