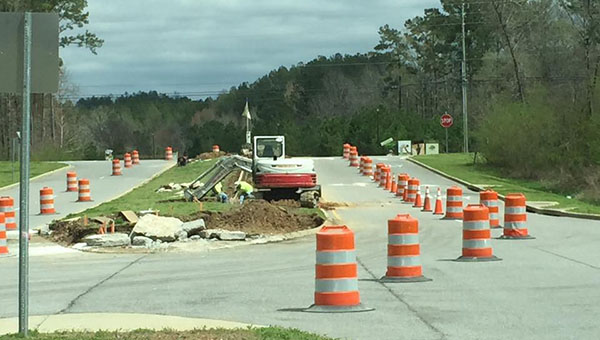 Construction has begun at the intesection of Shelby County 52 and Hillsboro Parkway in Helena. (Contributed)

HELENA–Roadwork has begun at the intersection of Shelby County 52 and Hillsboro Parkway in Helena to alleviate persistent traffic problems resulting from school traffic and backups during rush hour.

The first phase of construction work has begun to add a left turn lane followed by traffic signals and poles that will be added.

Helena Mayor Mark Hall noted that the construction of the new Helena High School and the increase in homes in nearby neighborhoods has contributed to the traffic problems over the years.

The traffic backs up when people have to try and cross four lanes of traffic and there is potential for collisions when drivers dart out into oncoming traffic.

“We are hoping that this project will help out with the traffic problems and boost the safety for drivers also,” added Hall.

The roadwork began on Tuesday, March 24, and USX Realty Development is funding the project where it should be finished sometime in late April depending on the weather.

Hall also noted that this project should help relieve traffic congestion when sporting events are held at the high school.

“It gets congested when we have 4,000-5,000 people show up in the fall for a Helena High School football game,” said Hall. “This project will help people get home faster after leaving the game.”