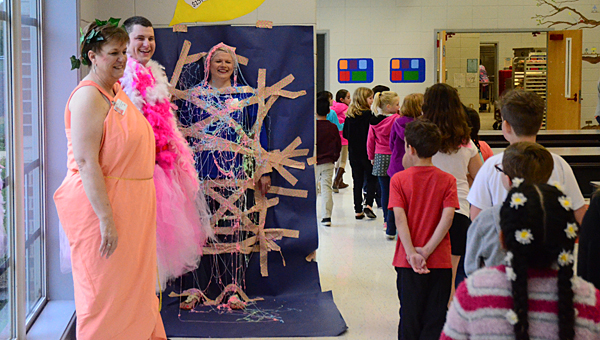 ALABASTER – Children frequently covered their mouths in shock after walking through the cafeteria doors at Meadow View Elementary School on the morning of March 27 as they caught a glimpse of their school leader bound to the wall.

“This is what y’all get for working so hard,” MVES Assistant Principal Carol Williamson, who was dressed in a bright pink toga, told one group of children.

Throughout the morning, the school’s students got to enjoy some of the fruits of their fundraising efforts as they saw their school leaders dressed in humorous costumes.

Over the past several weeks, the children have been raising money for the MVES Warrior Run, which was held at the school on March 16. Through the run, children gathered donations and pledges for each lap they ran during the event.

“Every cent will go back to the school,” said MVES physical education teacher Carol Spain, who helped organize the Warrior Run.

During the fundraising process, the school’s administrators promised to complete wacky tasks if the students reached the $15,000 goal.

Since the students far exceeded the goal, the top fundraisers got to duct tape school Principal Rachea Simms to the cafeteria wall and cover her in Silly String. Before being adhered to the wall, Simms got pied in the face by two students on the MVES morning news.

“They have stopped Mrs. Simms in the car rider line every day and asked when they get to tape her to the wall,” Spain said of the students.

The following students were top fundraisers in each grade: