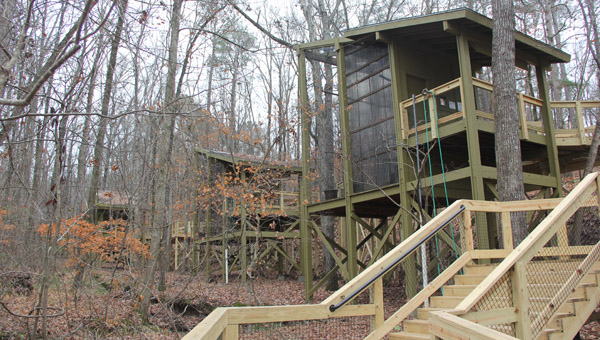 OMSP has made numerous improvements for park attendants to enjoy. (Contributed)

PELHAM— Alabama’s State Parks have been working on improvements both large and small all over the state.

Oak Mountain State Park brought visitors numerous exciting additions and renovations this year. All the cabins were renovated with new paint, flooring, A/C, and lighting. Thanks to a partnership between Shelby County and the park a new playground recently opened on Terrace Drive.

Another important partnership for the parks this year was a concession agreement with Flip Side Water Sports. Last summer Flip Side built and began operating a water cable course to allow guests to wake board or ski without a boat.

With the help of Shelby County, the Tree Top Nature Trail recently reopened after extensive renovations. The trail lets guests get up close and personal with birds of prey who are unable to be released into their natural habitat due to injuries.

“The Birmingham area is so lucky to have this incredible natural oasis at Oak Mountain State Park,” said Senator Slade Blackwell of Shelby County. “The State Parks attract millions of visitors annually, which has an economic impact on private businesses all over Alabama,” Blackwell said.

Last year Oak Mountain was one of nine of Alabama’s State Parks honored with the Award of Excellence from TripAdvisor. This is an honor reserved for the top tier of attractions, hotels, parks and restaurants out of the thousands of attractions around the globe.

A new archery course also opened this year at the park thanks to another important partnership with the Department of Conservation and Natural Resources, Wildlife and Fisheries Division and Shelby County. The facility includes an eight-target adult range from 15 to 50 yards and an eight-target kids range from 5 to 20 yards, and a four-target range of 10 to 40 yards.

“We are particularly lucky to have so many improvements at Oak Mountain,” said Greg Lein, director of the Alabama State Parks. “These great updates are possible because of the great partners we have in Shelby County, the City of Pelham and so many individuals who give back to their park. I know these partnerships will continue to make Oak Mountain an incredible park.”

On top of her full-time job as mother of three, Chelsea’s Beth Alcazar is also a firearms instructor and voice... read more