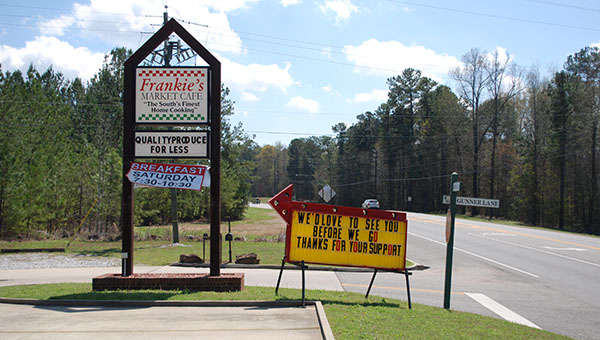 Frankie’s Market Cafe in Helena will be closing on Sunday, April 19, after 13 years of business. (Reporter Photo/Graham Brooks)

HELENA–A sign outside of Frankie’s Market Café on Shelby 52 reads “We’d love to see you before we go, thanks for your support,” and after filling bellies full of home cooked meats and vegetables for more than a decade, Frankie’s will be closing permanently on Sunday, April 19.

Frankie and Angie Cacioppo have been doing business in Helena for a total of 18 years. The first couple of businesses were produce markets before opening Frankie’s Market Café that serves as a meat ‘n’ three restaurant and fresh produce market.

“It’s very unique and there’s nothing like it in the south and it’s breaking my heart that I’m having to pull out of here,” said Frankie. “I wish we could’ve done more but the overhead and the costs are what forced us out.”

Rising power costs and other expenses are what’s forcing the restaurant to close and it’s in no way the result of a bad product. Anyone around the Helena area will tell you that Frankie’s food and produce is hard to beat.

“We cook cabbage fresh, our squash casserole is our best seller and we’ll be missed by the people because everything comes out of this produce market,” said Frankie.

Frankie was celebrating his 65th birthday on March 30 and right now he has a few things in mind for life after Frankie’s Market Café.

“On my 65th birthday I’m telling you that retirement sounds mighty good,” said Frankie. “But I have so many people who want us to stay in business and we’re looking to possibly go to McCalla.”

Frankie mentioned that they have had 146 comments online from people saying that they really want him to stay in business somewhere but if he chooses to do so he will only run a restaurant and no produce market.

Sunday is the best day for business according to Frankie and customers will have two more chances to eat at the café on a Sunday excluding Easter.