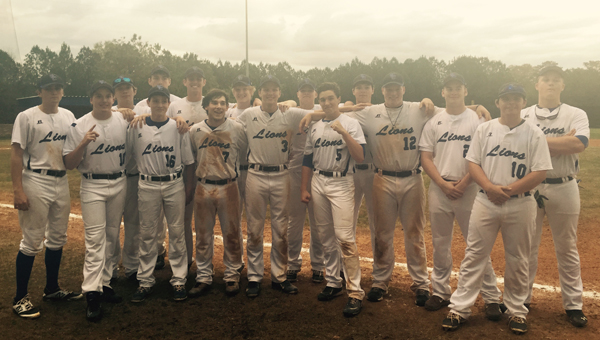 The Kingwood Christian baseball Lions improved to 16-10-2 after a four-day stretch from March 24-28 that saw them win three out of four games. (Contributed)

Kingwood Christian played Tuscaloosa Academy three times and took on Cornerstone Christian School as well in a four-day span. The Lions went 3-1 over that span, winning their last three in a row.

In the first game of a March 24 doubleheader against Tuscaloosa Academy in Tuscaloosa, the two schools combined for 22 runs. Wyatt Baker and Shiloh West combined to throw six innings in the losing effort for Kingwood and were never able to properly settle into the game. After opening up a 5-3 advantage in the third inning, Tuscaloosa scored nine runs in the next three innings to outpace the Lions and get the win. Garret Jones and Corey Robinson led the way for Kingwood from the plate as they both amassed three hits.

If offense was the name of the game the first go-around, the tables turned significantly when Jones took the mound for the Lions in the second game of the doubleheader. Jones threw 107 pitches in seven innings of work and allowed only two hits while striking out an impressive 14 batters. The game did not see its first run until the sixth inning, when Kingwood knocked one run across the plate, which was followed by two more in the seventh to give the Lions the 3-0 win.

Two days after the doubleheader that saw the Lions and Knights split a pair of close games, the two schools played again in a game that looked nothing like the previous two. Kingwood jumped on Tuscaloosa Academy early and took a 6-1 advantage into the second inning. Runs in the third, fourth and fifth inning would ice the game for the Lions as they waltzed to a 13-3 win. West and Dillon Calhoun saw time on the mound for Kingwood in the winning effort.

In the Lions’ fourth game in as many days, five pitchers took the mound as Kingwood held on to defeat a capable Cornerstone squad by a final of 14-7. Jones, Calhoun, Buddy Kittrell, West and Baker all saw action on the mound in the pitch-by-committee win. Baker also rocketed a grand slam over the left field fence in the top of the sixth inning to ice the game for the Lions.

The Helena Huskies baseball team defeated the Homewood Patriots 2-1 on Tuesday, March 24, after scoring two runs in the... read more