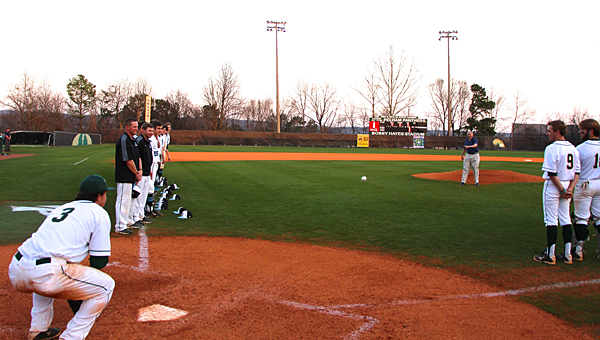 Retired Maj. Gen. James Darden, center, throws out the first pitch during a March 17 game between the Pelham Panthers and Helena Huskies. (Contributed)

PELHAM – The American Legion Matthew Blount Post 555 along with the U.S. Army Recruiting Command Color Guard conducted the ceremony to retire and replace the U.S. flag on March, 17 at the Bobby Hayes Baseball Field at Pelham High School between the first and second games of the double header between the Panthers and Helena High School.

general of the 87th Golden Acorn Command, was the special guest for the ceremony and threw out the first pitch to start the second game.

This flag has flown over each of these players and families during their high school careers while playing as part of Pelham High School.

Staff Sgt. Tyrell Mays served as the vocalist for the ceremony.

Mason Duke led the Spain Park baseball Jaguars to a 4-1 win over Oak Mountain on March 30 in the... read more