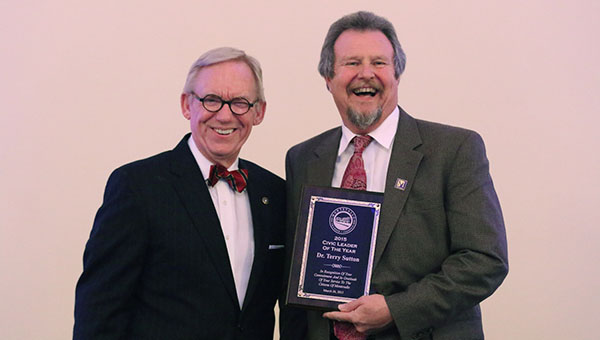 MONTEVALLO–A night that is solely dedicated to honoring those who have made a significant impact in the Montevallo community were honored at a banquet on Thursday, March 27, on the campus of the University of Montevallo at Anna Irvin Hall.

The night was kicked off by a performance by the Montevallo Community Chorale and then followed by a dinner before the award winners were announced.

The 2014 Civic Leader of the Year award recipient “Dollar Bill” Lawson served as master of ceremonies for this year’s banquet.

This year’s award recipient for Civic Leader of the Year was Dr. Terry Sutton and Steve Gilbert, executive director of the Montevallo Chamber presented him with the award.

“This person is not a resident of Montevallo but it’s quite obvious that that’s where his heart is and home is where the heart resides,” said Gilbert. “He has served Montevallo for over seven years now as pastor of First Baptist Church of Montevallo. His love for the people of this community daily shows through his leadership to his church and community.”

Plans for the installation of a wheelchair lift at the Pelham High School baseball stadium progressed recently to the bid... read more