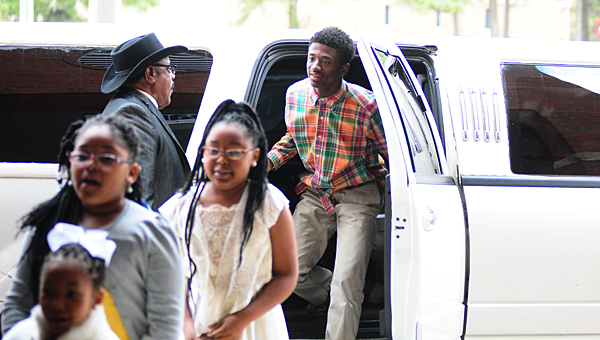 ALABASTER – Kids First Awareness Community Center Executive Director Cindy Hawkins was adamant about not starting a March 27 celebration until all of the center’s kids had a chance to exit a stretch limousine onto a red carpet.

“Why the limo?” Hawkins told the several hundred people packing the Alabaster First United Methodist Church Restore Building during the event. “We try to instill in our kids to never give up.

“The reason for the limo: It felt good to ride in that, didn’t it?” Hawkins asked the kids. “If you go to school and get a good education, go to college and be successful, you’ll have that feeling every day.”

The celebration marked the unveiling of a student-made music video called “Be Cool – Stay in School,” which is a positive rap song touting Kids First and the importance of obtaining a quality education.

The video, which the kids had been working on for several months, was a partnership between Kids First, the Shelby County Arts Council, Renasant Bank, Video Vision, the Methodist Church and Backpack Buddies.

“This video is a tool to communicate to the people who may not know what you do,” said Shelby County Arts Council Executive Director Bruce Andrews.

After the children – wearing their Sunday best – arrived at the Restore building in the limo, they had a chance to have their picture taken on the red carpet and then in front of a large backdrop.

During the celebration, several Kids First members sang and performed musical instruments before center volunteers and Methodist Church members prayed over the children.

Hawkins said working with Video Visions to create and produce the video helped instill teamwork in the kids.

“It’s hands-on project that helps prepare students for the real world, and that’s what it’s all about,” Hawkins said. “These are your next generation of leaders.”

“I want to tell these children how beautiful they look tonight,” Handlon said. “There are so many things you’ve got to be proud of.”

Vincent gets a win against BB Comer

Robbie Albright of Vincent slides into third base during a March 26 matchup with BB Comer. The Yellow Jackets won the... read more