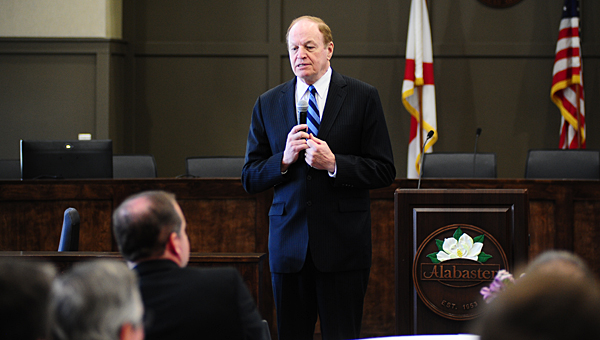 Shelby traveled to Alabaster during the 63rd stop of his campaign to visit all of Alabama’s 67 counties this year, and had lunch with several Shelby County mayors, county commissioners, state legislators and business owners.

Since 1980, the United States debt has grown exponentially to its current level of about $18.1 trillion, Shelby said. In 1980, the nation had about $909 billion in debt.

Shelby said interest payments on the national debt will continue to consume a growing portion of the United States budget in the future.

“It’s going to affect your children and grandchildren,” Shelby said. “(The federal government) is not paying the debt, they’re just paying the interest. The interest rates will continue to rise, and they will be the biggest thing in the budget.”

“I’m a de-regulator. I’m a market-driven guy. I believe in the law of supply and demand,” Shelby said. “This government, this administration, they want to regulate everything. They think they can regulate the economy, but it’s much bigger than that.”

Handlon said she and some of her fellow Shelby County mayors are concerned about new EPA regulations being placed on cities.

“The EPA has done some good things, but they have overreached in many ways,” Shelby said. “They say you’ve got to do it, but they don’t pay for you to do it.”

Shelby also said the upcoming 2016 presidential race will “determine the kind of America we are going to have in the future.”

“The next president of the United States will appoint at least four people to the U.S. Supreme Court,” Shelby said. “That will tilt the country to the left or to the right.”