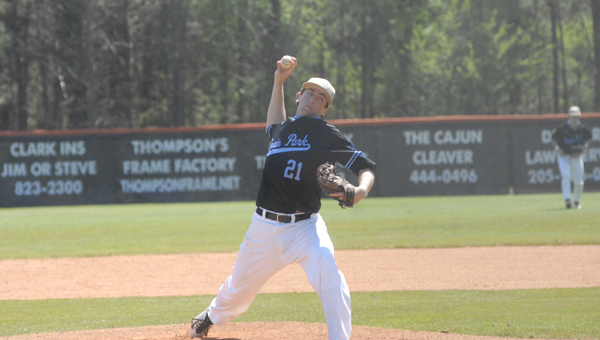 Mason Duke led the Spain Park baseball Jaguars to a 4-1 win over Oak Mountain on March 30 in the second game of the first day for the Jaguars in the Beef O’Brady’s Classic. (Reporter Photo / Baker Ellis)

HOOVER – Spring break might mean a respite from school, but not from the diamond. In the first day of a four-day long tournament held at Hoover High School, Spain Park split a pair of games against Southside and Oak Mountain, losing to the Panthers of Southside before beating the Eagles in the second game of the day.

The 7A fourth-ranked Jaguars sent Hayden Freeman to the mound to start the first contest of the day. Freeman went four innings, threw 66 pitches and struck out five while also giving up five runs. Bill Riley came on in relief and threw the last three innings of the game in scoreless fashion. All of Southside’s runs came en masse in the top of the second inning. With two outs and the score still tied at 0-0 the Jaguars gave up five runs on two hits when a Tanner Snow single brought in two and a Brock Love homer scored three. Drew Hawker tripled in the bottom of the sixth to score two runs and bring the score to 5-4, which brought Spain Park almost all the way back. However that was the last offense of the game for the Jaguars, and they would go on to lose.

The Jaguars scored a single run in the first, second, third and seventh inning of their second matchup with the Oak Mountain baseball Eagles. Those runs combined with the pitching efforts of Mason Duke, who went all seven innings on only 74 pitches and gave up just two hits, was enough to give Spain Park the win. Logan Gibbs of Oak Mountain lined up across from the Jaguars’ ace and went all seven innings as well. Gibbs threw 103 pitches and relinquished just four hits on the day in a valiant effort, however he would get little run support from the Oak Mountain bats due to Duke’s tremendous day.

NEAL EMBRY / For the Reporter COLUMBIANA – On a chilly night in Columbiana, the Shelby County Wildcats found themselves... read more