Vincent gets a win against BB Comer 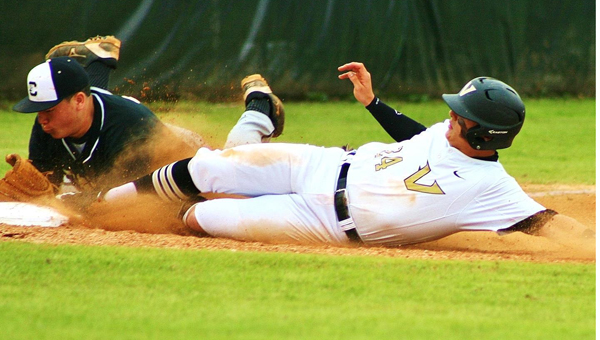 Robbie Albright of Vincent slides into third base during a March 26 matchup with BB Comer. The Yellow Jackets won the game by a final score of 8-5. (Contributed / Briana DiGiorgio)

BRIANA DIGIORGIO / For the Reporter

VINCENT – The Vincent Baseball team hosted an in-school game against the BB Comer Tigers on Thursday, March 26. The Jackets defeated the Tigers earlier in the season and hoped to get the same result in this game.

BB Comer came ready to play, and rang in two runs in the top of the first inning to put them in the early lead.

Kris Phillips, junior center fielder for Vincent, didn’t have any worries once he came up to bat for the Jackets. Phillips, with a 2-1 count, sent a ball out to left field and over the fence for his first home run of the season, which changed the score to 2-1.

Vincent soon put BB Comer out of the lead in the bottom of the third inning when the Jackets were able to score 4 runs past the Tigers, changing the score to 5-2. Kade Carroll, Austin Whitfield, Ethan Moran and Matthew Swift all scored in the inning. Comer knew they had to play some major offense and defense in order to keep Vincent from being in the lead and that was just what they did in the top of the fifth inning. Comer was able to score 3 run, which tied the game at five runs apiece.

With the game tied in the sixth inning at 5-5, the Vincent bats delivered again as they drove in three runs in the inning to give the Jackets what turned out to be an insurmountable advantage at 8-5. Ethan Davis came on in the top of the seventh and held BB Comer scoreless to give Vincent the win.

Austin Ray started on the mound for Vincent and threw 100 pitches in six innings before Davis came in as a relief pitcher and finished the game.