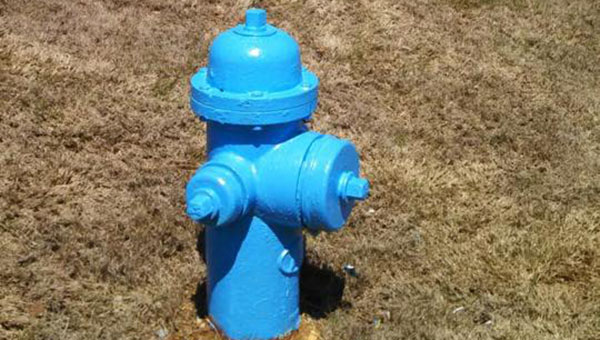 Certain fire hydrants around the city of Helena are painted blue in support of Autism Awareness Month for the month of April. (Contributed)

HELENA–The month of April marks the start of Autism Awareness Month in the city of Helena, and Helena residents soon will notice some changes for this year.

An idea came about to paint a few of the main fire hydrants in Helena blue in support of National Autism Awareness month that many cities and municipalities are participating in.

The idea to paint the fire hydrants blue around town was formed by Helena Councilwoman Leigh Hulsey, and then the Helena Fire Department went out and painted the hydrants.

Helena Mayor Mark Hall said the city participates in the Autism Awareness month each year, and said the city is big on supporting any causes that bring awareness and understanding to the community.

“It’s a good way to bring awareness to another very important cause in treatment and understanding of a disease to the community,” said Hall. “We have found that so many families are affected and we strongly believe it’s something we can promote.”

Jennifer Johnson will help light up City Hall with blue lights in the month of April.

The month of April will be a big month for the city of Helena, and holding events to raise awareness for certain diseases.

The OHOH Race to End Childhood Cancer 5K will be held Saturday, April 4, and the Relay for Life Walk-a-Thon will be taking place on Friday, April 24, with both events being hosted in the city of Helena.

“We always support the various awareness months and organizations we are involved with and anything that brings awareness to worthy causes,” said Hall. “We especially want to support those diseases that are still in the research phase, and we are happy to support those causes any way we can.”