By COURTNEY WILLIAMS / Special to the Reporter

CALERA – The Central Tuscaloosa Falcons received an all but tedious victory at the nest of the Calera Eagles on Friday, Jan. 23.

Within three minutes of the first quarter, the two teams were already in a heated battle for the first point. 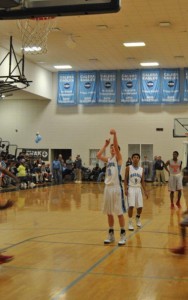 Dylan Brantley, a senior at Calera High, began the night with several rebounds, helping the Eagles to end the first quarter with a leading score of 9-6.

As the anticipation for a lead took over in the second quarter, the Central Tuscaloosa Falcons called a time-out, leaving the scoreboard to hold a close score of 11-10, Calera in the lead.

As the two teams went neck and neck in an attempt to gain a lead on the other, halftime was entered with a score of 21-14, Central Tuscaloosa making a successful comeback.

After being fouled by the opposing team, LaDarrius Barnes, a current junior at Calera High, took to the free throw line in attempts to gain his team an additional two points.

Successful in his attempt, the third quarter came to a close with a score of 24-16. Ke’Darrius Tinker, guard, and also a junior at Central Tuscaloosa, earned his team an extra three points, furthering the lead on Calera.

Despite an all but work-shy opposition, the Eagles’ last home game of the season came to a close with a score of 43-31, the Falcons carrying away the combative victory.

Chase Martin takes a cut at a ball in an earlier game this year against Helena. Martin helped lead Pelham... read more