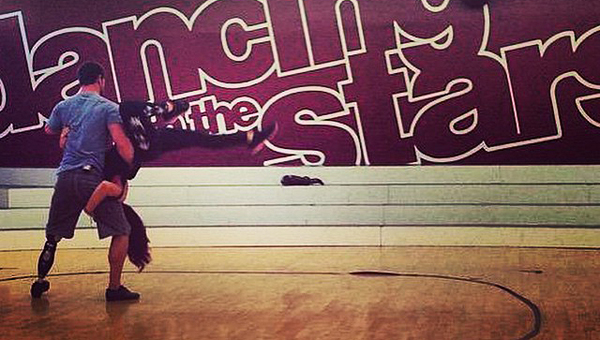 Noah Galloway and his dancing partner Sharna Burgess rehearse for the March 30 show of Dancing with the Stars. (Contributed)

Alabaster resident Noah Galloway earned plenty of praise and a high score during week three of competition on “Dancing with the Stars,” and will continue his run on the show for at least another week.

During his performance with professional dancer Sharna Burgess on the March 30 show, Galloway performed an Argentine tango dance, earning compliments from the show’s four-person judging panel.

“That is the best dance you have done,” judge Julianne Hough told Galloway. “There was obviously nothing simple about that.”

Galloway, a former U.S. Army sergeant, lost portions of his left arm and leg in an improvised explosive device attack near Baghdad, Iraq, in 2005.

Before the week three Dancing with the Stars competition, Galloway was fitted with a sophisticated prosthetic arm to use during the performance. In rehearsal footage shown during the March 30 show, Galloway expressed displeasure with using the arm, and decided to dance without it.

Judge Len Goodman said Galloway is his “hero” after the performance.

“Your tenacity is incredible,” Goodman said.

“That was miraculous. The interpretation of the dance was spot-on (and) on the money,” Tonioli said. “The partnership was incredible.”

While judge Carrie Ann Inaba also praised the couple’s performance, she shared some slight criticisms with the pair’s dancing synchronization.

“I want to improve, and I want to know where those improvements need to be,” Galloway said after the performance.

After the results were in, Galloway and Burgess earned a score of 30 out of 40, which placed fifth out of the 12 contestants.

Galloway has developed a strong following among residents of his hometown, as Alabaster locations such as Chubb’s Grub Station and the Alabaster YMCA have begun holding watch parties each night Galloway is on the show.