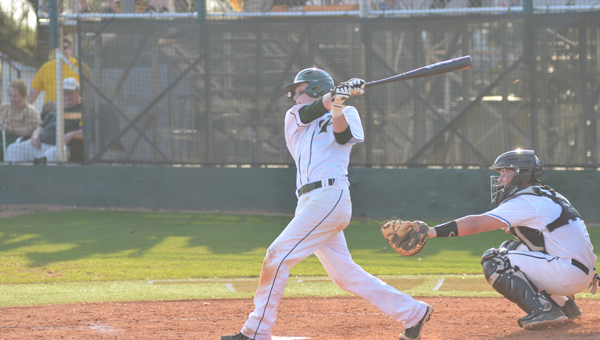 Chase Martin takes a cut at a ball in an earlier game this year against Helena. Martin helped lead Pelham to a 9-0 victory over Regis Jesuit in the IMG National Classic on March 30 in Bradenton, Fla. (File)

BRADENTON, Fla. – Pelham headed south for spring break to participate in a tournament hosted at the IMG Academy in Bradenton, Fla. with teams from a number of states. The first game of the tournament for Pelham was on March 30 against Regis Jesuit High School from Aurora, CO. The Panthers and Sam Finnerty took apart the Raiders by a final of 9-0.

Through five innings, the game remained tied at 0-0 before Pelham broke the game open with an eight-run fifth inning, which propelled them to a healthy lead that Regis Jesuit could not hope to overcome because of who was on the mound for the Panthers.

Finnerty went a full seven innings for the fourth time in as many starts, and pitched arguably his best statistical game of the season to date. With two hits on 103 pitches and 12 strikeouts to his name, the Raiders never came close to plating a run in the contest.

“Sam did another great job commanding the strike zone with three pitches,” Pelham head coach Sean Anderson said. “He gives us a chance to win every time he takes the mound. We played very well defensively with no errors but when you strike out 12, that doesn’t leave many outs.”

In the fifth inning the Panthers went through their entire lineup and had three batters come to the plate twice in the hitting extravaganza. In the inning, Pelham recorded six hits, two walks and a runner who reached base via an error on their way to the eight-run blitz. Finnerty, Justin Anderson, Hunter Stovall, Cole Whitman, Logan Brashier, Chase Martin and Tyler White all reached base in the inning either due to a hit, walk or error. The Panthers scored six of the eight fifth inning runs with two outs on the board.

Finnerty was the only Panther to record multiple hits, recording a single and a double while driving in three runs to lead the team from the plate as well as the mound. Boomer Murchison doubled in his only at-bat on the day while Anderson, Whitman, Brashier, Martin and White rounded out the rest of the hits for Pelham.

With the win the Panthers advanced to 15-6 on the year.

Mason Duke led the Spain Park baseball Jaguars to a 4-1 win over Oak Mountain on March 30 in the... read more