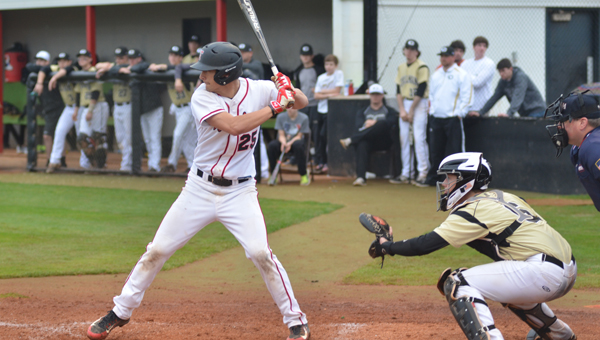 Stephan Poplin and the Thompson Warriors won three games in the first two days of the Beef O’Brady’s Classic from March 30-31. (File)

HOOVER – Over the first two days of the Beef O’Brady’s Classic in Hoover, Thompson played four games and won three. After a perfect first day on March 30 that saw the Warriors defeat Hartselle and Northridge, Thompson split a pair of March 31 games against Cullman and Pell City.

Colin Lillie went the distance from the mound for Thompson in the first game, throwing a full seven innings on 96 pitches. He allowed three runs on seven hits and struck out five in the contest. With the score tied at 3-3 in the fourth inning, Chris Lewis scored when Zach Brammer smacked a double to left field to give the Warriors the slight advantage, which they were able to hold on to for the remainder of the game as Lillie kept the Hartselle bats at bay the rest of the way.

Down 2-3 in the bottom of the sixth inning, the Thompson bats erupted for seven runs to take a commanding 9-3 lead going into the last inning of the game. Hunter Goggans came on to relieve Lance Johnson from the mound to pitch the last inning in shutout fashion. Johnson went six innings for Thompson from the mound and struck out seven while giving up seven hits. Riley Reach, Heath Haskins, Johnson and Adam Durrett each had two hits in the game.

The first game of the day on March 31 pitted the top ranked team in class 6A, Cullman, against 7A No. 8 Thompson. This was the fourth meeting between the two schools this season, with Thompson holding a slight 2-1 advantage in the series before this contest. This game needed extra innings to decide, as both teams exited the seventh inning with six runs apiece. Unfortunately for the Warrior faithful, the Cullman bats used a flurry of action to knock four runs across the plate in the top of the eighth to win 10-6.

Pell City scored four runs in the top of the seventh to pull within one run of the Warriors, who had plated seven runs over the previous six innings, but were held at bay when it mattered most. Tyler Hosmer relieved Matthew Blaes, who had pitched the first 6.1 innings of the game, to get the final two outs and the third win in two days for the Warriors.