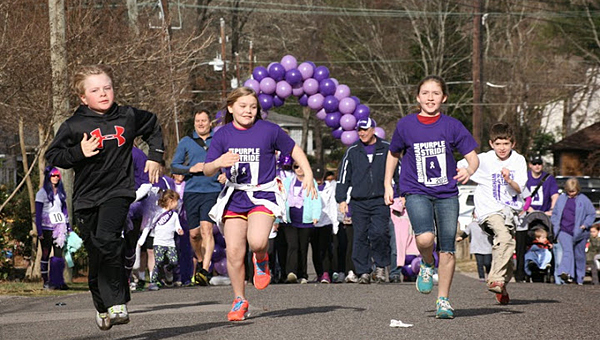 The Purple Stride will come to Hoover’s Veterans Park on April 18. (Contributed)

HOOVER – For Alabaster City Councilman Russell Bedsole and his wife, Dena, the upcoming Purple Stride event at Hoover’s Veterans Park will be much more than just a fundraiser. It will signify hope for those affected by one of the deadliest forms of cancer.

“The five-year survival rate for pancreatic cancer is 7 percent right now, which is the lowest among all major cancer forms,” Bedsole said during an April 1 interview. “In the past 30 years, it’s risen 1 percent from 6 percent to 7 percent.”

The Pancreatic Cancer Action Network is working to double the five-year survival rate to 14 percent by 2020 by advocating for pancreatic cancer patients, informing the public about the disease and fundraising for research on the disease.

On April 18, the organization will look to address all three goals during the Purple Stride of Birmingham event at Veterans Park. The event, which is presented by UAB Medicine, will feature a timed 5K run and a 1-mile walk, as well as children’s activities, vendors, live music from the local Christian band “Cannot be Contained” and more.

Jamie Langley, a former Miss Alabama and a current employee at WIAT 42 will emcee the event, which will be one of hundreds of Purple Stride events across the nation this year.

This will mark the first year the Purple Stride has been held in Shelby County, as it previously was held in Homewood, Bedsole, who is working with his wife to organize the event, said.

The Bedsoles share a passion for supporting the Pancreatic Cancer Action Network, as Russell previously lost an uncle and Dena lost her father to the disease.

“We will have survivors present at the event,” Bedsole said. “Because of the low survivability rate, to see them is so inspiring.”

“I knew from what I was hearing, this was a very serious type of cancer,” said Button, noting her boss, Jim Greer, was recently diagnosed with pancreatic cancer. “This wasn’t just my boss we’re talking about, he’s my best friend. My 11-year-old son, Michael, is an avid runner and was determined to run for Jim.

I started looking for local events we could participate in and almost immediately I found PurpleStride Birmingham. I created a team instantly,” Button added. “Just when I started to lose hope and I thought there was nothing else I could do to help my dear friend, I stumbled upon this inspiring event.”

To learn more about the event, and to register for the walk or run, visit Purplestride.org/Birmingham.

By NEAL WAGNER / Managing Editor ALABASTER – A 43-year-old Alabaster man with a lengthy criminal history is facing a... read more