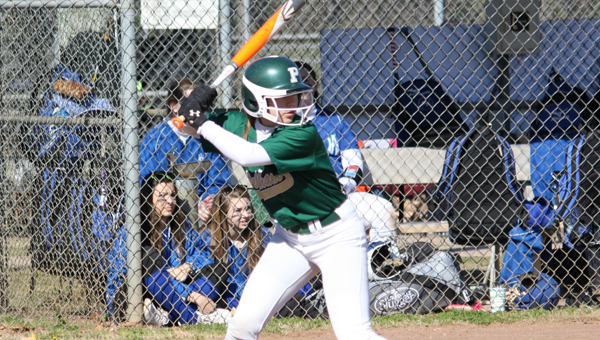 Sawyer Martin and the Pelham Lady Panthers advanced to 11-3 after back-to-back games on March 26-27. (Contributed)

PELHAM – From March 26-27, the Lady Panthers of Pelham split a pair of games with John Carroll Catholic and Leeds to move their overall record to 11-3.

Cadence Crocker pitched a complete game, seven-inning effort for Pelham on March 26 against the visiting Lady Cavaliers. Crocker threw 111 pitches during the contest and relinquished nine hits, but only one run.

Dalton Merrill and Maddie Walker both led the way for Pelham from the plate with two hits each. Sawyer Martin, Hannah Pritchett, Kacie Maher, Steeley Martin and Grace Nolan each added one hit apiece in the contest as well.

Pelham jumped on John Carroll in the first inning. After Pritchett drew a one-out walk, Merrill promptly followed by hitting the first pitch she saw into center field for a single, which put runners on first and second. Walker stepped up next and took the second offering into left field for a double, which was enough to score Pritchett and Merrill both. The 2-0 lead held until the fourth inning, when the Lady Panthers added another run. Four more runs in the fifth inning brought the score to 7-0. John Carroll finally got on the board in the seventh, but it was too little too late, and Pelham got the win.

Crocker took the mound to start the second game in as many days for Pelham, this time against class 4A No. 10 Leeds. Crocker lasted 4.1 innings and gave up 10 hits and seven runs before Pritchett came on in relief. Pritchett finished the game out for Pelham and gave up five hits and three runs.

Pritchett and Maher both had three hits in the contest to lead the way from the plate. Merrill, Carly Edinger, Steeley Martin and Nolen all added one hit to the Pelham total as well.

The Lady Panthers took a 4-1 lead into the third inning, however, Leeds outscored Pelham 9-2 over the next five innings to take the 10-6 win.