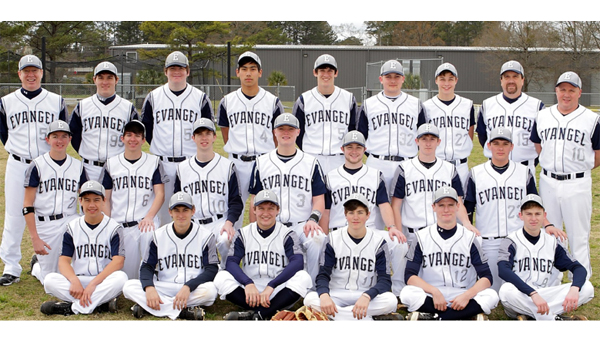 The Evangel Christian baseball Lightning, despite a rough weekend in Nashville, stand at 13-5-1 on the year. (Contributed)

NASHVILLE, Tenn. – After scoring 10 or more runs in 13 of their first 15 games of the season, the Evangel Christian baseball Lightning fell off of their meteoric pace slightly in the last week. Evangel spent the weekend of March 27-28 participating in a tournament in Nashville with teams from four different states. The Lightning went 1-3 in the two-day event.

Koty Watts took the mound to start the tournament and lasted five innings. He gave up one run on three hits and threw 68 pitches in his solid outing. Matthew Earwood came on in a relief capacity in the sixth inning and gave up three runs on as many hits over the last two innings.

The Lightning held a 1-0 lead as the game moved into the fourth inning before Memphis scored its first run. The 1-1 tie held until the sixth inning, when the Eagles scored two runs and added another in the seventh to take the game by a score of 4-1. Stephen Cullen and Cameron Kimbrel were the only two Evangel batter to get a hit in the game.

Cullen and Tyler Byrd both took the mound in the second game of the first day of the tournament and gave up a combined four runs in the shortened, five-inning game. The Lightning scored two runs in the bottom of the fifth and left a man on third before the game was called two innings early, and the Lightning fell for the second time on the day. Hahn Lau, Watts, Kimbrel and Rafael Cabello all tallied a hit in the contest.

The third game of the weekend was the low point for the Lightning. The bats of the Huntsville quad were not to be denied, as they scored seven runs in the first inning on their way to a 13-1, four-inning victory.

The tournament ended on a positive note for the Lightning, as they held on for a 7-5 win against the squad from Indiana. Jacob Albright pitched a complete game effort, gave up six hits and five runs and struck out seven. Cabello was a perfect 3-3 from the plate on the day, and Watts, Kimbrel, Albright and Luke Smoke each added a hit in the win.

Sawyer Martin and the Pelham Lady Panthers advanced to 11-3 after back-to-back games on March 26-27. (Contributed) By BAKER ELLIS... read more