COLUMBIANA – A 31-year-old Centreville woman will spend the next five years on probation after she pleaded guilty to exposing her unborn child to methamphetamine and marijuana earlier this year. 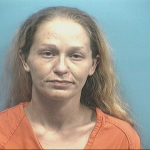 Dessa Maree Rodgers, who lists an address on Wesley Drive in Centreville, pleaded guilty to one felony count of chemical endangerment of a child on March 19. Circuit Court Judge Dan Reeves accepted prosecutors’ recommendations, and sentenced Rodgers to five years of supervised probation.

As part of her sentence, Rodgers also must pass random drug and alcohol tests while on probation.

The Alabaster Police Department arrested Rodgers on Jan. 23 and charged her with one felony count of chemical endangerment of a child.

According to her arrest warrant, which lists a Jan. 22 offense date, Rodgers allegedly exposed her unborn child to the two controlled substances while she was pregnant.

Chemical endangerment of a child is a Class C felony. Rodgers could have faced between one and 10 years in prison.