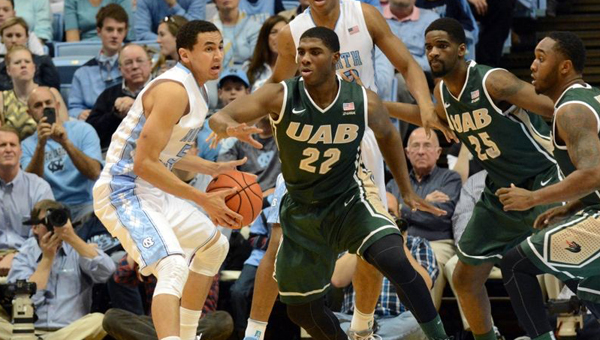 Shelby County’s Tyler Madison (22) has become a steady contributor for the UAB basketball team. Madison helped lead the Blazers to the Round of 32 in the NCAA Tournament when they upset Iowa State in Louisville on March 19. (Contributed)

On Saturday, March 20, a day after the University of Alabama at Birmingham had pulled off the upset of the 2015 NCAA Tournament and turned themselves into a national storyline by beating Iowa State, Tyler Madison gave his hometown some love. He took to Facebook and posted a picture of himself, in the forest green colors of UAB, roaring at an unseen opponent, with a caption that read, “Columbiana Made Me!!!”

Madison comes from a basketball family. His two older brothers played professionally in Europe, and he knew he wanted to play in college before he could dribble. He is listed as a 225-pound, 6-foot-4-inch sophomore guard for the Blazers, and has been a steady contributor in his first two years with the team. In high school he accrued, among other distinctions, AHSAA Birmingham Tip-Off Club Player of the Year and was a first team All-State nominee. He was a Mr. Basketball finalist in Alabama in his senior campaign when he averaged 23.7 points and 10.2 rebounds per game. He has made Sportscenter’s Top 10 Plays of the Day and in the Iowa State game he contributed nine points and 11 rebounds.

While no one doubts Madison’s ability on the basketball court, it is his character and persona off it that have made his hometown so proud.

Stephanie Nettles is a teacher at Shelby County High School and taught Madison 10th grade history and 12th grade psychology. She remembers Madison and the effect he had on those around him in his high school days.

“Everyone has bad days,” Nettles said. “With Tyler, you can never tell when he’s having a bad day. He exudes confidence, and regardless of the circumstances, every day is a good day for Tyler. He was a leader amongst his peers.”

Nettles went on to say, in the two weeks leading up to Madison’s graduation, she frequently was brought to tears because of how special he was and how special his graduating class as a whole was.

Madison himself has not forgotten his hometown of Columbiana. He credits the town and the slower pace of life for helping shape and mold him

“It’s a quiet town,” Madison said in an April 1 phone interview. “It helped me stay grounded. Everybody knows everybody, which I think is good. It’s also good from a basketball point of view because there was always someone to play with, everybody played growing up.”

With a tinge of national spotlight under his belt, the future looks bright for Columbiana’s son, who makes sure to come back whenever he can.

“I come to as many high school games as I can,” Madison said. “I come back home, go to church with my family, just try and stay in touch as much as I can.”

As Madison enters his junior season and his Blazers attempt to build on the success of the 2014-15 campaign, he can rest easy knowing he has the full support of his hometown.