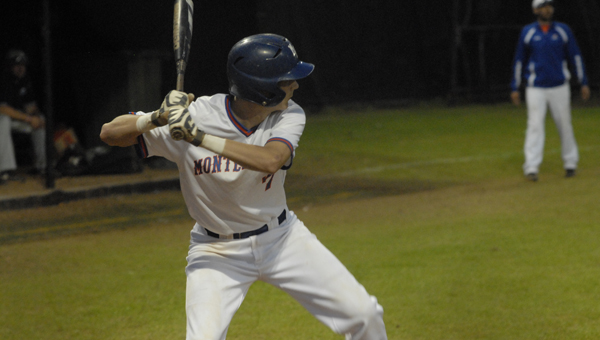 Montevallo sophomore Zac Oden hit a two-run home run in the first inning of a April 1 game against cross-county foe Calera and helped lead the Bulldogs to an 11-1 win. (Reporter Photo/Baker Ellis)

MONTEVALLO – On April 1, the Montevallo baseball Bulldogs welcomed visiting Calera into their domain before dismantling the hapless Eagles by a final score of 11-1.

Nick Thompson started on the mound for Montevallo and never relinquished his post as he threw 104 pitches over six innings, struck out nine and allowed only one run on six hits. Austin Mckinney and Dylan Reddin both saw time on the mound for Calera in the contest. Mckinney started the game and lasted 1.1 innings before Reddin came on in relief and pitched the remainder of the game in the losing effort.

Montevallo freshman Ahmad Edwards singled off the first Mckinney pitch of the game before Zac Oden promptly hit a bomb over the left field fence to give Montevallo two runs before Calera had even settled into the game. Hunter Nabors and Justin Pickett also crossed the plate for the Bulldogs in the first inning to bring their run total to four.

The 4-0 score lasted only until the bottom of the third inning, when the first three batters for Montevallo, Jackson Hughes, Darrin Douglas and Thompson either reached base on error or were walked to load the bases. Jaret Yancey hit a ground ball to the shortstop soon after, but the ball was mishandled, which allowed Hughes and Douglas to score and bring the Montevallo lead to 6-0. Thompson later scored in the inning as well.

Calera scored a single run in the fifth inning when Jacob Smith and Will Glasscock both doubled, which allowed Smith to score. However the offensive output was too little, too late as Montevallo coasted to an 11-1 win that only needed six innings to decide.

The freshman Edwards led the way for Montevallo from the plate, going 2-for-4 with two RBIs and a double. Jonathan Pintaro slammed the second homer of the game for the Bulldogs over the left field fence on the first pitch of the sixth inning to match Oden’s first inning shot.

Glasscock led the way for the Eagles with his 2-for-3 outing and single RBI.

By GRAHAM BROOKS / Staff Writer The Helena boys golf team is playing in their inaugural season as a team... read more