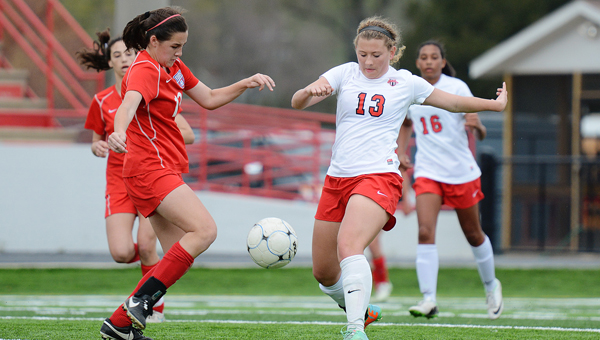 Thompson’s Mariah Poe battles for a ball against a Vestavia defender in their March 27 matchup. The Lady Warriors came out victorious by a final score of 1-0. (Contributed/ Troya Yoder)

ALABASTER – On March 27, two of the top 7A girls’ soccer teams squared off when the Lady Warriors paid a visit to Vestavia Hills. Thompson is currently ranked sixth in the state in class 7A while Vestavia Hills is ranked fourth. This was the first and only matchup between the two squads of the regular season, and Thompson came away victorious by the slimmest of margins, 1-0.

At the 26 minute mark of the first half, Thompson freshman Peyton Poe received a pass from junior Allison Singleterry and slipped a shot past the Vestavia Hills keeper. The 1-0 lead held throughout the remainder of the half.

In the second, both teams had chances and played high-level soccer, however neither team could add to the 1-0 score, and the Lady Warriors escaped with the victory and moved their record to 14-4.

Thompson did not concede a goal in the first six games of the year, and won nine of their first 10 games. The Lady Warriors have won eight games by two goals or fewer and have lost two games by the same margin, and as a result they are no strangers to close games, which will inevitably serve them well in the postseason.

The Lady Warriors will be back in action on April 7 when they face Helena.

Stephan Poplin and the Thompson Warriors won three games in the first two days of the Beef O’Brady’s Classic from... read more