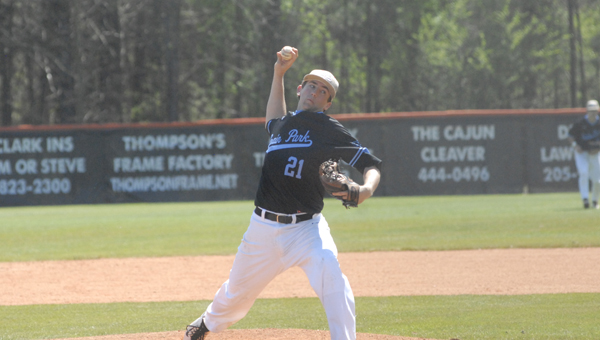 HOOVER – The spring break Beef O’Brady’s Classic ended for Spain Park the morning of April 9 in the quarterfinals at the hands of crosstown rival Hoover. The 7A eighth-ranked Bucs jumped on the fourth-ranked Jaguars early, and Spain Park never recovered. This game came less than 24 hours after Spain Park took down class 6A overall No. 1 Cullman via a 9-7 decision.

In the quarterfinal matchup with Hoover, Quinton Hoffman, Adam Schultz and Jake Whitehead all saw action on the mound. Hoover scored three runs in the second inning to take an early 3-0 lead, but used a backbreaking four-run fifth inning to close the door on any potential comeback. Hunter Bacon was on the mound the entire afternoon for Hoover, throwing 114 pitches over his seven innings of work and striking out five.

With the Bucs firmly in control with a 9-0 lead in the bottom of the seventh inning, the Spain Park bats finally began to show some life. After Reed Thomas slapped a one-out single to centerfield, Rodney Anderson came to the plate one batter later. Anderson took the first offering Bacon served over the left field fence for a home run, which gave the Jaguars their only runs on the day. The glimmer of hope brought by Anderson’s bomb was short lived, however, as Wes Holley struck out looking to end the game just one batter later.

Anderson and Bryan Sanderson both had two hits on the day, while Tyler Wise, Thomas and Wade Streeter rounded out the rest of the hits for the Jaguars.

Hoffman lasted three innings on the mound, gave up seven hits, four runs and struck out two. Schultz only lasted 1.2 innings where he gave up just one hit, but walked three and saw four runs cross the pate. Whitehead finished the final 2.1 innings and gave up four hits and one run.

Spain Park won four of their six games in the Beef O’Brady’s Classic, and moved to 17-10 on the year at the end of the tournament.

By BAKER ELLIS / Sports Editor ALEXANDER CITY – Down one run in the bottom of the seventh inning, with... read more