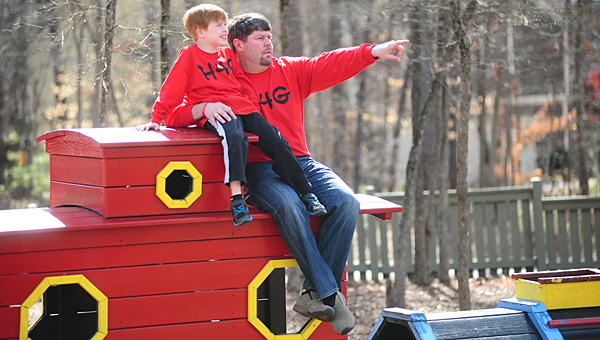 State Sen. Cam Ward, R-Alabaster, is planning to sponsor legislation to legalize some experimental medications. The legislation would benefit children such as Gabe Griffin, pictured with his father, Scott. (File)

After learning about the struggles Shelby County 9-year-old Gabe Griffin faces on a daily basis, state Sen. Cam Ward became inspired to do something to help not only Griffin, but those facing terminal diseases in all parts of the state.

“When you see the suffering he is going through … Just because something has not received the government seal of approval doesn’t mean you should deny it to a child who needs it,” Ward, R-Alabaster, said during an April 3 phone interview.

Ward is planning to introduce a bill into the state Senate in early April in an effort to help Griffin, who has a rare genetic mutation known as Duchenne muscular dystrophy, and other individuals facing terminal illnesses.

If passed, the bill would allow terminally ill patients to have access to experimental medications not approved by the federal Food and Drug Administration. The bill would not require insurance companies to cover the cost of the experimental medications, would only apply to phase I clinical trial-approved drugs and would place no liability on the drugs’ manufacturers.

As a result of Duchenne, Griffin, who will turn 10 in May, is expected to be in a wheelchair in the next few years and die when he is about 20.

“Nobody has more hope invested in institutional medical research than families of patients whose lives could be saved by new treatments. We appreciate that Senator Cam Ward is going to try and pass this law in Alabama,” Griffin’s father, Scott, wrote in a statement. “Several trials have been ongoing for years now with less side effects than drugs currently approved by the FDA, Senator Ward understands our situation as a father and a legislator.”

The Griffin family’s foundation, Hope for Gabe, recently teamed up with Alabama resident Michael Staley for a cross-country bicycle ride to spread the word about Duchenne.

“When we stopped in Montgomery last August during Ride4Gabe, we met with Governor Bentley and Mrs. Diane Bentley, and we told them we wanted to get a right to try law passed in Alabama in 2015,” Staley wrote. “Senator Ward and Representative (April) Weaver have committed to help with the legislative process and we know that Governor Bentley will sign it if the legislature sends it to his desk.”