A state Senate bill sponsored by state Sen. Cam Ward, R-Alabaster, could bring back electric chair executions in Alabama if lethal injections are ruled unconstitutional or if the state is unable to procure the ingredients to carry out lethal injections.

Ward sponsored the bill during the current session of the Alabama Legislature as the Senate version of a similar bill sponsored by state Rep. Lynn Greer, R-Rogersville.

As of April 6, the bill had passed the state House of Representatives, and was awaiting action by the Senate Judiciary Committee.

If passed, the bill would “require a person sentenced to death after the effective date of the act to be executed by electrocution if lethal injection is deemed unconstitutional by the courts or if an ingredient essential to carrying out a lethal injection is unavailable to the Department of Corrections.”

Currently, all executions in Alabama are carried out by lethal injection “unless a person sentenced to death affirmatively elects to be executed by electrocution.”

Ward said the bill was modeled after a similar law passed recently in Tennessee, and said he worked with Greer to sponsor the bill to ensure there is a “fallback execution method” should lethal injections not be available.

“There are lawsuits filed every day challenging the validity of using lethal injections as an execution method,” Ward said during an April 3 interview.

Ward said he expects the bill to pass the Senate and be signed into law. 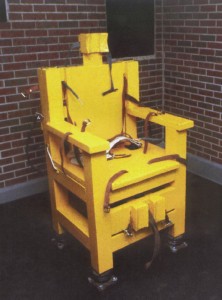 A bill currently under consideration in the Alabama Senate could bring back electric chair executions in Alabama. (Contributed)