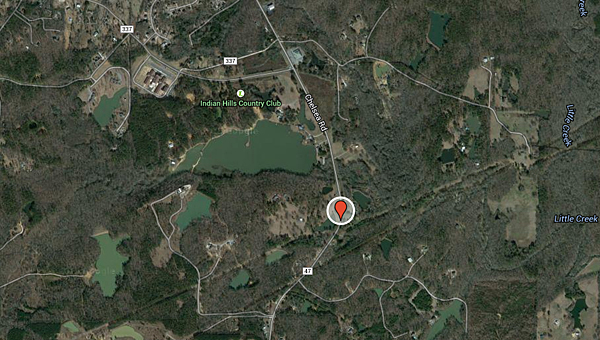 One person was killed and two others were transported to the hospital after an April 4 crash on Shelby County 47 south of Chelsea. (Contributed)

CHELSEA – A 42-year-old man was pronounced dead and two others were transported to the hospital after they were involved in a two-vehicle wreck on Shelby County 47 on April 4.

The Shelby County Sheriff’s Office and Alabama State Troopers responded to the wreck at about 6:30 p.m. after a 1999 GMC C1500 pickup truck driven by 42-year-old Preston Lee Brasher collided head-on with a 2003 Dodge Ram 1500 driven by 50-year-old Randal Scott Headrick.

Amanda Carrie Headrick, 24, was a passenger in the Dodge Ram, which was towing a boat at the time of the wreck. Randall and Amanda Headrick suffered injuries and were transported by ambulance to UAB Hospital.

Brasher was pronounced dead on the scene.

According to a State Troopers report, Brasher’s vehicle was traveling south on Shelby County 47 when it crossed over the center line and collided with the Dodge. After the collision, the boat came off the trailer and struck the Dodge, which then caught on fire.

The wreck closed Shelby County 47 for about four hours.

Columbiana man gets 15 years for rape of young victim

By NEAL WAGNER / Managing Editor COLUMBIANA – A 36-year-old Columbiana man who previously listed an address in Alabaster was... read more